3 Reasons Not to Sweat the Latest Taper Tantrum

Will the Federal Reserve raise interest rates this time? The markets have already reacted as though a rate hike is imminent, with the yield on the 10-year Treasury bond increasing to almost 2.5 percent from about 1.6 percent in late January 2015.

Investors have sold utility stocks and other dividend payers en masse, using concerns that rising interest rates will erode the value of future dividends as an excuse to take profits after last year’s rally.

And a growing consensus expects these stocks to suffer another sharp selloff later this year, when the Fed inevitably raises interest rates.

Believe it or not, utility stocks historically have exhibited scant correlation to movements in interest rates, save for the knee-jerk selloffs that occur when the market starts to worry about impending action from the Federal Reserve.

“A Question of Correlation” quantifies the extent to which movements in the Dow Jones Utilities Average correlate with the S&P 500 and the yield on 10-year Treasury bonds over various time periods. Note that higher R-squared values—a statistical measure of correlation—indicate a closer relationship between the two indexes being compared. 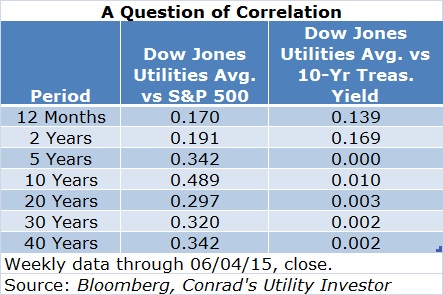 For every period in our table, the Dow Jones Utilities Average exhibits more of a correlation to the S&P 500 than movements in interest rates. This shouldn’t come as a shock. Whereas bonds pay investors a fixed coupon, stocks tend to track the underlying companies’ growth prospects and offer exposure to potential dividend growth.

Some of the best opportunities in the utility sector offer an implied annual return of more than 10 percent when you factor in current yield and dividend hikes.

Bottom Line: No matter which time frame you choose, utility stocks do not act like bonds. Shifts in market sentiment can trigger plenty of volatility in the near term. But at the end of the day, a company’s health and growth prospects drives the performance of its stock over the long term.

Reason No. 2: Utilities at Peak Health

How have utilities performed as companies? The sector is arguably at its healthiest since the 1950s, before a costly expansion phase that weakened balance sheets and drove subpar returns.

My Utility Report Card tracks more than 200 essential-services companies—non-subscribers can see a complete listing here—the vast majority of which delivered first-quarter results that either met or exceeded management’s internal guidance. 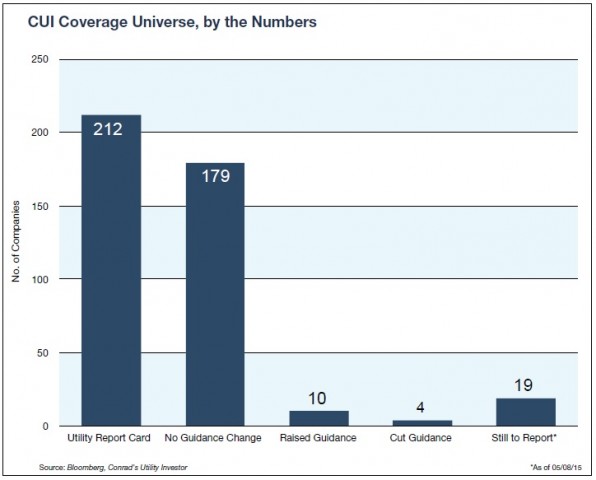 Every earnings season, the investing world focuses on whether companies’ profits, revenues and other financial metrics lived up to Wall Street’s consensus estimates.

Although these successes and failures can drive stock performance in the short term, we prefer to focus on whether a company’s results live up to management’s guidance—the foundation on which dividend policies and capital spending plans are based.

A company that consistently meets its internal guidance usually boasts a management team that understands the business environment and communicates effectively with investors.

Conversely, names that fail to hit their guidance warrant extra scrutiny, particularly if they are repeat offenders. Of the more than 200 essential-services companies tracked in my Utility Report Card, only four cut their 2015 guidance as a result of subpar first quarters—an impressive feat.

This strength reflects more than a dozen years of systematic de-risking among electric, gas and water utilities.

Following Enron’s implosion in late 2001, more than two dozen utilities found themselves either in bankruptcy or on the precipice of insolvency. A new generation of management teams refocused these companies on their core regulated businesses and committed to shedding riskier operations, paying down debt and repairing badly frayed relations with regulators.

These efforts enabled the utility sector to weather the 2008-09 financial crisis and the Great Recession with relative aplomb; only four of the more than 200 companies I tracked at the time cut their dividends.

And after more than six years of historically low borrowing costs, utilities have shored up their balance sheets even more by refinancing higher-cost debts and extending maturities. Management teams also continue to reduce operating risk by reducing their exposure to a wholesale market challenged by depressed natural-gas prices.

The infotainment industry continues to trumpet the potential for growing adoption of rooftop solar-power units to erode utilities’ long-term viability.

However, first-quarter results from US electric utilities indicate that underlying demand for baseload power continues to grow, despite the popularity of distributed solar power in some states. This trend reflects surging use of electronics by businesses and households, coupled with conservation efforts that largely have picked the low-hanging fruit.

Meanwhile, utilities have grown their regulated rate base by acquiring and building utility-scale solar-power facilities that produce four times the electricity as a similar investment in rooftop solar-power installations.

Utilities have also entered the market for distributed solar power. Southern Company (NYSE: SO) became the latest to pursue this business, with the recent announcement that, starting July 1, Georgia Power customers will be able to enter long-term financing arrangements for rooftop solar panels.

Bottom Line: Instead of disrupting utilities’ business models, the growing popularity of solar power creates another avenue for these companies to grow their earnings and dividends.

Insiders include a company’s executives, board members and other interested parties that are privy to non-public information. These individuals must abide by certain rules regarding their investment activities, particularly when it comes to disclosure or trades involving the company’s stock.

Trends in insider ownership can provide a barometer of management’s confidence in the company’s prospects, though you shouldn’t rely on these data points alone when deciding whether to buy or sell a stock. Investors should always place greater stock in the health of the underlying business and industry-specific developments.

Executives often receive a sizable chunk of their compensation in stock and sell these holdings for a variety of reasons. However, when insiders buy large blocks of shares in the open market, this move suggests confidence in where the company is headed.

Over the past six months, insiders at almost one-third of the companies in our Utility Report Card increased their aggregate holdings by at least 10 percent—a strong vote of confidence at a time when fears of rising interest rates have spooked many investors. 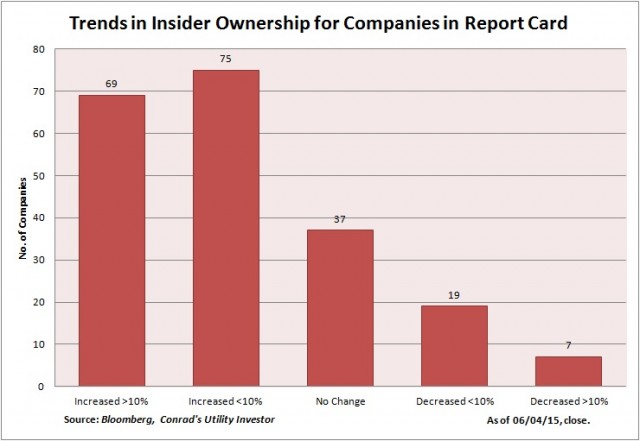 Investors shouldn’t regard this bullishness as a surefire sign that utility stocks will rally this summer or later this year. However, insiders’ willingness to buy shares in the companies they know best makes a strong statement about the sector’s underlying health, a reassuring thought in the midst of the recent selloff.

A lack of historical correlation between utility stocks’ total returns and interest rates, coupled with the sector’s financial strength and insider buying, make a compelling case for why investors with a longer time horizon should view this pullback as an opportunity to buy high-quality names instead of running for the hills.

But not every stock is worth your while. Investors should focus on buying best-in-class stocks at reasonable valuations, instead of fretting over what the Federal Reserve may or may not do.