A Survey of Canadian REITs

At the time, these Canadian REITs traded at an average of 1.08 times book value, well below the Bloomberg North American REIT Index’s price-to-book ratio of 2.15 times. (See Canadian REITs: The Price is Right.)

The valuation gap between US and Canadian REITs has widened in subsequent months.

Whereas most of the 19 Canadian REITs that highlighted in this article have either treaded water or headed lower, the Bloomberg North American REIT Index has rallied, shrinking its yield to 3.4 percent and expanding its price to book value to 2.75-to-1. 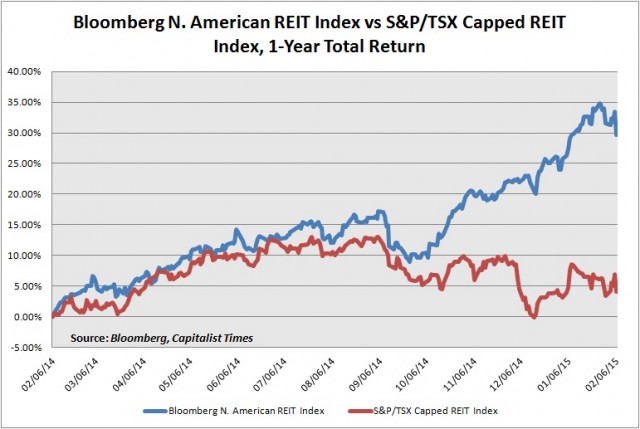 The Canadian dollar’s slide relative to the greenback—the loonie has tumbled more than 17 percent since its 2012 high—in part explains the S&P/TSX Capped REIT Index’s underperformance. 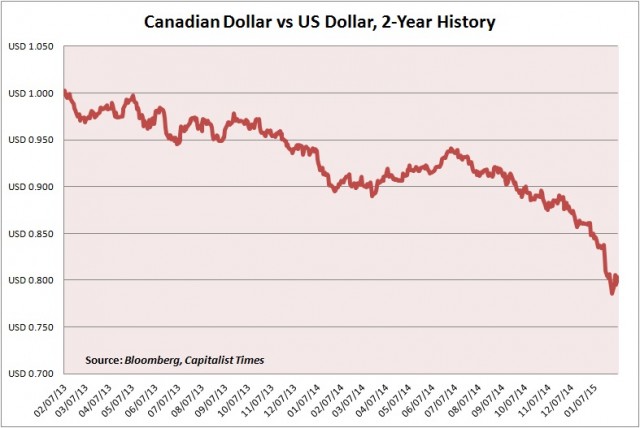 Conditions in local real estate markets have also weighed on Canadian REITs, with concerns about overbuilding in Toronto and other major cities hitting the office segment particularly hard.

Meanwhile, REITs that own property in areas associated with oil and gas development in Western Canada have slipped amid concerns that the collapse in crude prices would hurt the local economy.

Solid as a Rock

The vital statistics for the 19 real estate investment trusts highlighted in “The REIT Stuff” paints a picture of an industry that should be able to ride out the aforementioned headwinds and at least maintain their dividends.

With an average payout ratio of 80.5 percent, most of the Canadian REITs in our table boast secure dividends.

The majority of these names also run lower debt levels than their US counterparts, while the industry has taken advantage of low interest rates to extend maturities and reduce financing expenses.

Plummeting oil prices in the 1980s and 1990s taught Canadian REITs the value of conservative operating principles and a solid financial structure. These harsh lessons limited dividend cuts during the 2008-09 financial crisis, when elevated leverage forced so many US REITs to cut their payouts.

Even the REITs on our list that have the highest payout ratios don’t appear to be in danger of slashing their dividends next year, though growth likely will prove hard to come by.

But not every name in our table will experience these problems.

Brookfield Property Partners LP (TSX: BPY-U, NYSE: BPY)—a newcomer to our Canadian coverage universe—increased its targeted annual dividend growth rate to between 5 and 8 percent, though the firm failed to raise its payout in 2014.

Since completing its initial public offering near the market top in 2007, InterRent Real Estate Investment Trust (TSX: IIP-U, OTC: IIPZF) has evolved into one of Canada’s fastest dividend growers.

Growing supply will continue to pressure the office market in 2015, though this headwind won’t necessarily result in lower rents. Expect property owners to increase their expenditures on building improvements to stay competitive.

Calgary, Edmonton, Fort McMurray and other markets that depend heavily on the energy sector will also face challenges, though we won’t get a full read on the damage until at least the second quarter of 2015.

Marginal economic growth in Canada means that Toronto-listed equities will appear less appealing relative to their counterparts in the US, where the economy grew at a 5 percent rate in the third quarter, topping the Bloomberg consensus estimate for 4.3 percent.

Our neighbor to the north will benefit to an extent from the strengthening US economy, though surging US oil and gas production and falling prices for those commodities have ratcheted up the pain for Canada’s energy sector.

Robust trade with Asia contributed to the Canada’s superior economic growth rate during the Great Recession; by the same token, the slowdown in China represents another headwind north of the border. The energy sector, which accounts for about one-third of private investment in Canada, will feel the pain most keenly.

Bank of Montreal’s (TSX: BMO, NYSE: BMO) annual outlook calls for the widest gap in the US and Canada’s economic performance since 1996. In fact, Canada’s six largest financial institutions project that the nation will grow its gross domestic product (GDP) by less than 2.5 percent next year.

Against this backdrop, money managers looking for exposure to North America will focus on the US instead of Canada.

This litany of challenges explains why institutional analysts have assigned Hold ratings to the majority of the REITs on our list—a clear sign of a sector afflicted with the blahs.

For one, markets always look forward, not backward. Given the widening valuation gap between US and Canadian REITs, you’d be hard-pressed to argue that these stocks’ haven’t already priced in expectations of economic weakness.

The US-Canadian dollar exchange rate also shows signs of finding a bottom, while weakness in the energy patch likely will prompt Canada’s central bank to postpone any interest rate increases. Better-than-expected economic growth in Asia would also bolster the value of Canada’s currency.

And investors should consider that even the most pessimistic outlook for Canadian economic growth calls for GDP to expand by more than 2 percent, suggesting that the 19 REITs in our table should have no problem paying their dividends. We expect at least half to hike their payouts.

Selling for barely book value and sporting above-average yields, Canadian REITs are an excellent addition to a diversified, income-generating portfolio—especially for investors with a longer time horizon.

Although low valuations don’t guarantee a recovery, market conditions will improve at some point. And until then, investors can collect a steady monthly or quarterly payout at a decent current return. Subscribe to Capitalist Times Premium to learn more about our favorite Canadian REITs.