The most useful takeaways from industry and investment conferences are rarely listed in the program or highlighted in presentation slides. They’re the nuances you can only pick up by attending, keeping your eyes and ears open while you’re there, and then taking the time to reflect critically on what you’ve seen and heard.

My eureka moment from last year’s edition of the Edison Electric Institute’s financial conference occurred during a panel discussion on technology.

At the time, a growing consensus suggested that electric utilities faced fierce competition from distributed solar power. But reviewing quarterly results for the more than 200 companies covered in my Utility Report Card made me confident that utilities were winning the war–a defensive struggle with limited upside.

However, comments from SunPower Corp’s (NSDQ: SPWR) CEO playing up the construction of large-scale solar-power installations, primarily in partnership with electric utilities, piqued my interest immediately. The executive barely discussed rooftop solar power and dismissed charges that the utility sector lacked technological savvy as “a myth.”

At that moment, SunPower’s sponsorship of one of the electric-power industry’s biggest events made sense. The war was over. Utilities had won, and the only salvation for SunPower and other component manufacturers was to butter up the victors.

In contrast, some of our favorite electric utilities have turned solar energy into a profit driver, investing in regulated and contracted generating capacity as well as the grid enhancements needed to accommodate variable power sources.

One of my takeaways from this year’s edition of the Edison Electric Institute’s financial conference also took me somewhat by surprise: Utilities have been talking to major tech companies about how they can better serve this important customer base. In contrast, SunPower’s only presence at the conference was as a logo on the swag bag issued to attendees.

In a panel entitled “Breaking Bad: The Customer’s Recipe for Utility Service,” the participants weren’t executives from the industrial giants like Caterpillar (NYSE: CAT) or Nucor Corp (NYSE: NU), but rather representatives from Facebook (NSDQ: FB) and Microsoft Corp (NSDQ: MSFT).

For most of the utility sector’s history, giant manufacturing concerns have been electricity generators’ most important customers—not only in terms of direct sales, but also the economic health of their service territories and for maintaining good relations with state regulators.

When major manufacturers expand their facilities and hire more workers, the local economy prospers, driving industrial and residential power sales. In contrast, when a major industrial customer shutters production capacity, sales take a hit across the board. To worsen matters, regulators may even retaliate against utilities.

Historically, industrial companies have focused on the cost of electricity. When utilities sought to recover the cost of capacity additions during the 1970s and ‘80s construction boom, industrial ratepayers revolted in the 1990s and push to deregulate electricity markets and open them up to competition.

Utilities responded by pushing rates lower for their biggest customers. But over the past few years, several power companies have drawn the line at selling their output for a loss.

For example, earlier this year, Missouri-based utility Ameren Corp (NYSE: AEE) punted its largest customer, a smelter owned by Noranda Aluminum, instead of selling electricity to the facility at prices that were below cost.

Although the smelter accounted for about 10 percent of Ameren’s electricity sales, refusing to cow to this industrial customer resulted in only a 2.3 percent hit to the utility’s bottom line. The company also accelerated its rate of dividend growth this year to $0.0175 per share, up from a $0.0125 boost in 2015 and a $0.01 increase in 2014.

This anecdote is telling. Industrial sales no longer make or break utilities’ profits to the extent that they did in the past. 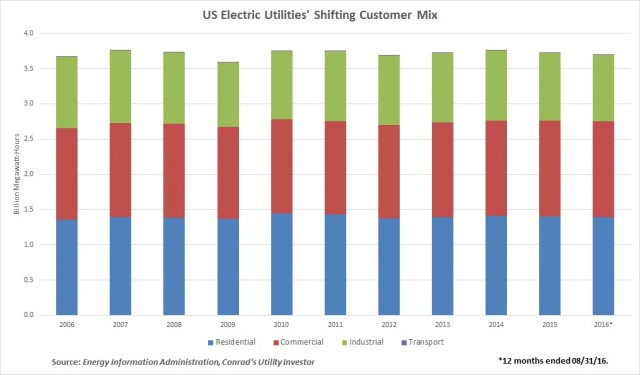 In 2006, industrial customers accounted for about 27.6 percent of US utilities’ electricity sales volumes; over the 12 months ended Aug. 31, 2016, this proportion had slipped to 25.5 percent.

Commercial customers, in contrast, have climbed to about 36.7 percent of total electricity sales. Not surprisingly, courting commercial customers has become an increasingly important focus for management teams in the utility sector.

Big Tech and Its Demands

However, as executives from major tech companies explained to their peers in the utility sector at the Edison Electric Institute’s financial conference, their needs and priorities differ somewhat from industrial customers.

In the 1990s, industrial customers angled for rate cuts by threatening to leave utilities’ systems and produce their own electricity, primarily via gas-fired co-generation plants.

Executives from Facebook and Microsoft told the audience that their companies have zero interest in owning and operating generation capacity, provided utilities can meet their needs and priorities.

Representatives from the tech sector also acknowledged that electric utilities have made progress on many of these fronts, but still have a way to go—which bodes well for their future growth prospects.

Like factory owners in the previous century, big tech companies view their data centers and related campuses as long-term investments in a local communities that will become a profit and innovation centers in their own right.

Five-year spending plans in the utility sector suggest that management teams have listened to the tech industry.

In fact, some electric utilities have stepped up their investments in renewable energy since the presidential election, regardless of the incoming administration’s plans for the Clean Power Plan and federal energy policy. (We analyzed the outcome of the US federal and state elections for the utility sector in Election 2016: Plenty of Good News for Utilities.)

For example, Dominion Resource (NYSE: D) on Nov. 17 announced an agreement to purchase five solar-power projects in its service area that will supply electricity to data centers owned and operated by Amazon.com (NSDQ: AMZN). These installations will come onstream in late 2017, with a nameplate capacity of 180 megawatts.

Amazon.com aims to eventually obtain all its electricity from renewable resources, a goal that will require Dominion Resources and its other utility partners to invest heavily in grid enhancements and baseload power from gas-fired plants. These investments will flow into utilities’ rate base, driving earnings and dividend growth.

Microsoft has also inked a solar-supply contract in Virginia with Dominion Resources and has agreements to power data centers in Illinois and Texas with 285 megawatts of wind capacity.

Even the handful of companies building conventional power plants plan to spend billions of dollars on solar power and upgrading their power grids over the next few years.

Southern Company (NYSE: SO), for example, has two nuclear reactors under construction in Georgia that will cost billions of dollars. But the gas and electric utility will spend even more on infrastructure improvements that will flow through to its rate base—the company’s biggest source of earnings and dividend growth over the next half-decade.

Long the king of coal-fired power plants, American Electric Power (NYSE: AEP) historically has catered to industrial customers, but the utility plans to embark on a similar wave of investments in clean energy.

For the first time since the power industry’s inception in the late 19th century, manufacturing and other heavy industries no longer call all the shots.

Big tech and its budding relationship with utilities, coupled with the cost competitiveness of solar power and the shale gas revolution, continue to reshape the US electricity landscape and drive earnings and dividend growth,

To be sure, heavy industry remains an important piece of most utilities’ sales mix and will for many years.

For example, Entergy Corp (NYSE: ETR), which serves markets in the Mid-South, expects to grow its rate base in the upper single digits per annum into the next decade. Much of this upside will come from expansions of the US petrochemical complex, a construction boom enabled by an abundance of low-cost natural gas and natural gas liquids.

But for some utilities, closer cooperation with big tech presents an easy way to grow profits in coming years.

After acquiring SolarCity Corp (NSDQ: SCTY), Tesla Motors (NSDQ: TSLA) will become one of the leading purveyors of the rooftop solar-power systems that have sapped demand for electricity from conventional sources. (Here’s our take on this controversial deal.)

But as an executive from California-based utility PG&E Corp (NYSE: PCG) noted at the Edison Electric Institute’s financial conference, Tesla Motors is also a major customer and a potential technology partner for investments in grid upgrades and energy storage.

What does the utility sector’s emerging relationship with big tech mean for investors?

In the near term, best-in-class electric utilities with exposure to this trend and other upside drivers should be able to continue growing their earnings and dividends at an annual rate in the upper single digits—all by investing in low-risk projects that will make their most important customers happy.

This positive environment should ensure that sector corrections, like the overdue one that began in early July, should be regarded as buying opportunities.

Over the longer term, utilities will become increasingly efficient, which should support friendly relations with state regulators.

On the other side of the coin, big tech can reduce costs by using energy more efficiently. Utilities’ focus on technology and cybersecurity could also make the group a potential growth market for some companies’ products.

Now is the best possible time to subscribe to Conrad’s Utility Investor.

You’ll get my exclusive takeaways and best ideas from two days of conversations with management teams and institutional investors at the Edison Electric Institute’s annual financial conference. You won’t find this on-the-ground intelligence in any other newsletter.