Buy the Pullback in Dividend-Paying Stocks

Tighter money sooner: That’s the consensus forecast for the Federal Reserve’s policy after Janet Yellen’s first speech as leader of the US central bank.

The new chairwoman acknowledged that the Fed might start to raise interest rates six months after phasing out its bond-buying program toward the end of 2014.

The markets’ kneejerk reaction news hardly came as a surprise. Stocks slipped, with dividend-paying names absorbing the biggest hit. The US dollar surged against the euro and British Pound. Meanwhile, emerging-market equities gave up more ground.

In other words, the Taper Trade continues.

After the Fed first signaled its intention to scale back its bond buying and eventually raise interest rates, the market sold off securities with perceived exposure to interest rates.

Snapback rallies in many of these stocks followed, as investors come to grips with the fact that the Fed will normalize its policies gradually.

The Taper Trade has rewarded traders who’ve been able to swap positions to match the market’s rapidly changing mood–and burned investors who bought into conventional wisdom and tried to follow their lead.

This week, the Fed reduced its open-market bond purchases by another $10 billion a month. Yellen also indicated that she would use other employment measures to gauge the nation’s economic health and drop her predecessor’s former target of a 6.5 percent unemployment rate.

And as I pointed out What’s Rate-Sensitive and What’s Not, dividend-paying stocks are not bond substitutes.

Buy you don’t have to take my word for it. Check out this graph tracking total returns posted by various dividend-paying equities and the year-over-year change in the yield on the 10-year US Treasury note. 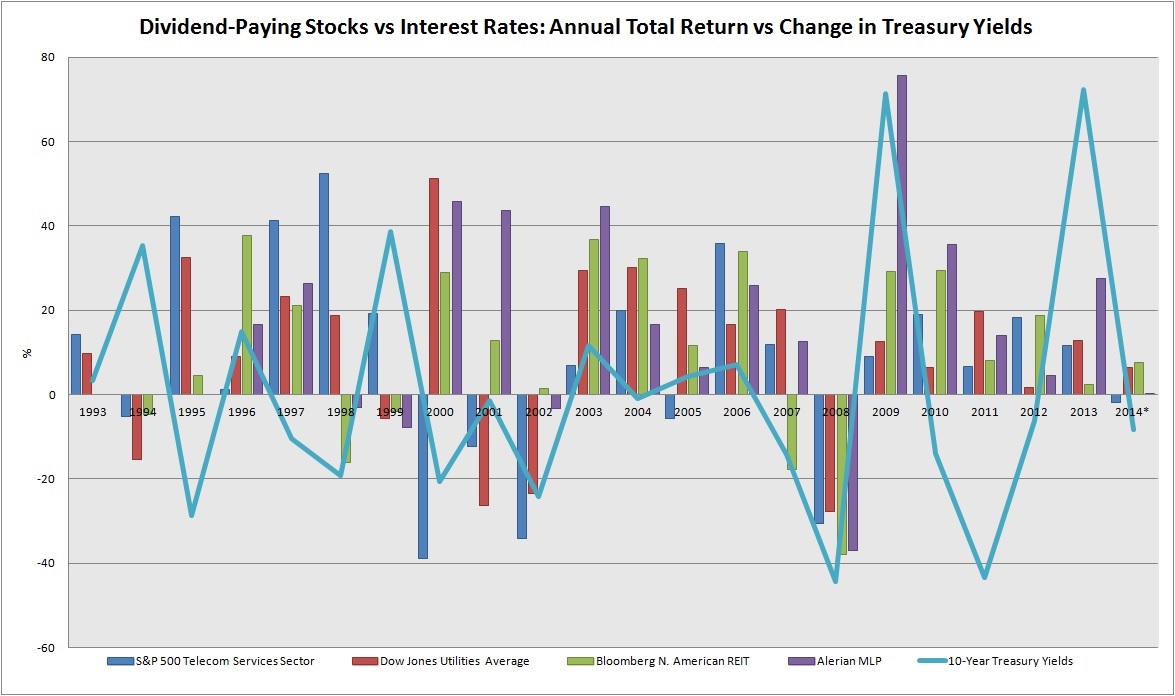 Last year, the current return on the 10-year Treasury note surged by more than 72 percent–a dramatic increase in interest rates. Nevertheless, all four dividend-paying stock indexes in my graph posted a positive total return in 2013.

Conversely, a historic drop in interest rates didn’t save dividend-paying stocks from the market implosion and economic carnage associated with the financial crisis and Great Recession.

Dividend growth is one reason high-yielding stocks don’t necessarily follow interest rates up and down.

But even names whose dividend has stagnated exhibit little correlation to interest rates.

The reason for this counterintuitive phenomenon: A strengthening economy and rising demand tends to improve the security of a company’s dividend and mute the effect of an uptick in interest rates.

In this environment, investors pile into riskier stocks that offer high yields because solid economic growth reduces the imminent threat to their dividends. 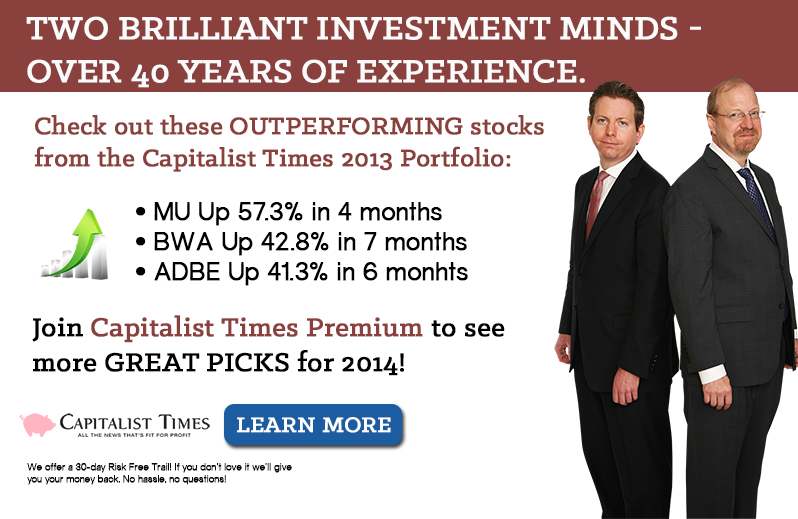 Consider the case of telecom services provider Frontier Communications Corp (NSDQ: FTR). The company has slashed its dividend twice since mid-2010 and is unlikely to increase its payout for at least the next few years.

Frontier Communications’ stock exhibits an R-squared of 0.092 relative to the S&P 500, indicating that the shares have little correlation to the market index. And the stock’s correlation to the yield on the 10-year US Treasury note is even lower, clocking in at 0.005.

Despite Frontier Communications’ 7.4 percent yield and stagnant dividend, the stock itself has exhibited little sensitivity to fluctuations in interest rates.

That being said, an investment in Frontier Communications entails elevated risk because of significant company- and industry-specific challenges.

The company’s traditional phone business continues to erode, while its broadband business hasn’t grown at a sufficient rate to stabilize the firm’s overall revenue.

And with the acquisition of AT&T’s (NYSE: T) wirelines in Connecticut, Frontier Communications will add another $1.9 billion to its already onerous debt burden.

Adding to the strain, the telecom will face an additional $130 to $160 million in cash taxes after several subsidies expire.

Frontier Communications plans to allocate much of its free cash flow to retiring debt and reducing its interest expenses.

The firm’s debt expiring in 2014 carries a lofty coupon of 8.25 percent, while next year’s bond maturities have rates of 6.625 percent and 7.875 percent. With a yield to maturity of 6.578 percent on its 10-year debt, the odds of a money-saving refinancing appear to be in the company’s favor.

But a sustained uptick in interest rates could erode the magnitude of these anticipated cost savings.

In the meantime, Frontier Communications will need to offset customer attrition in its traditional business line with growth in its broadband subscriber base. A stronger economy would give the telecom a better shot at achieving this balance.

Where the Buys Are

Investors should regard any weakness in dividend-paying stocks as an opportunity to establish or add to positions in high-quality names.

Taking advantage of these ill-informed selloffs requires selectivity; buying best-of-breed companies that operate solid businesses makes it easier to pull the trigger during a pullback and leads to superior returns over time.

Here are the most fertile hunting grounds for income-seeking investors looking to take advantage of the Taper Trade’s return.

One favorite of income investors that’s not on our shopping list: bonds. As I explained in Bonds: Still a Seller’s Market, investors should largely steer clear of this asset class.

Those looking for specific ideas should consult Capitalist Times Premium‘s Lifelong Income Portfolio, which includes my favorite dividend-paying stocks from a wide range of sectors and industries.