Buying and holding stocks backed by healthy, growing businesses is still the surest way to build sustainable wealth. However, nurturing your nest egg depends on navigating the market’s momentum-driven swings, staying calm and doing your due diligence.

Almost seven years ago, this bull market rose from the ashes of the worst market crash in 80 years. By the time the crisis had run its course, retreating US real estate prices had morphed into a systemic contagion that threatened global financial system. Banks that lent heavily to the sector suffered major losses, precipitating a credit crunch that took its toll on almost every industry.

Utility stocks–my focus for almost 30 years–also sold off in the second half of 2008. But thanks to systematic reduction of risk and debt following the 2001 Enron implosion, their businesses held steady. And within months of the bottom, most essential-services stocks were well on their way to new highs. 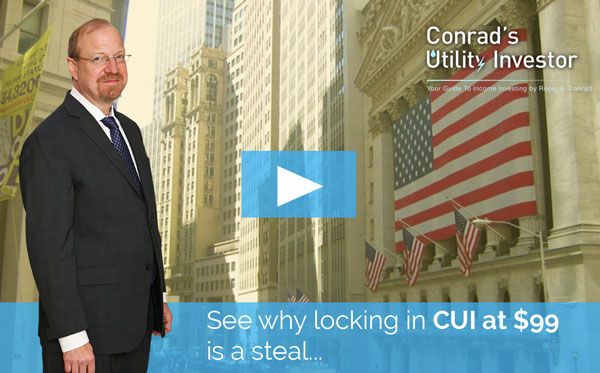 In subsequent years, utilities have continued their conservative ways. TECO Energy (NYSE: TE), for example, shed its coal-mining business—a business segment that faces significant challenges. Other companies have sought to cut their exposure to wholesale-power markets, where weak natural-gas prices continue to weigh on profits.

Companies also continue to focus capital expenditures on system upgrades and expansion projects that will grow their rate base, even in states where regulators remain stingy with returns.

As for debt, utilities have continued to take advantage of low corporate borrowing rates to refinance higher-rate debt and push out maturities. Moreover, the industry’s largest projects are financed as they’re built, with incurred expenditures flowing into rate-base increases.

Consider SCANA Corp (NYSE: SCG) and Southern Company’s (NYSE: SO) construction of new nuclear reactors. Both utilities have partnered with state entities: SCANA with Santee Cooper and Southern Company with Oglethorpe Power, the Municipal Electric Authority of Georgia and the city of Dalton. The US Dept of Energy has also helped to underwrite Southern Company’s Vogtle project with a $6.5 billion loan guarantee.

Utilities continue to neutralize the perceived threat of rooftop solar power by co-opting the business.

Meanwhile, Wisconsin Energy Corp (NYSE: WEC) managed to squelch subsidies for rooftop solar that posed a threat to its sales.

The utility sector is far stronger than it was heading into the 2008 crash. Today, the primary risk is valuation, with the Dow Jones Utilities Average trading at almost 18 times earnings and yielding just 3.3 percent.

In the current environment, a sizable allocation to utility stocks looks like a good antidote to what’s shaping up to be a season for caution.

How likely is a major pullback in the market or a systemic event? The question is whether the severe downdraft in crude-oil prices will have ramifications beyond the energy sector.

Over the course of this almost seven-year-old bull market, the influence of institutions and exchange-traded funds (ETF) on trading has grown steadily—even in utilities and other sectors that traditionally have been the preserve of individual investors.

Institutional investors and big pools of private capital have a fundamentally different set of objectives than the rest of us; they’re incentivized to maximize returns over a given calendar period and have little patience for underperformers.

Meanwhile, ETFs appeal to investors for the ease with which they can add or drop diversified exposure to a specific sector, industry or trend. When the most popular ETFs experience heavy trading volume, stocks that feature prominently in these investment vehicles can experience significant buying and selling momentum that often has little to do with actual business fundamentals.

In these instances, momentum takes over and traditional measures of value go out the window.

In a vacuum, a collapse oil prices would hurt producers and inhibit the growth of other energy companies. Consumers and businesses, on the other hand, would find themselves with more cash. (See The Demand Side Beckons, Consumption Junction and Game Plan for Lower Oil Prices.)

But the energy sector doesn’t exist in a vacuum. Producers, processors, pipelines, refiners and distributors operate capital-intensive businesses that require access to credit and capital markets.

Unfortunately, 10-Q reports don’t necessarily indicate how much exposure big and small banks have to the halving of oil prices. When you consider that the energy sector has been one of the few bright spots in the economy, the risk could be considerable. And the financial sector’s track record for anticipating and preparing for systemic shocks isn’t encouraging.

Energy-related issues account for a sizable chunk of high-yield bond portfolios; the retreat in these securities has already showed up in the performance of these funds.

In some instances, energy bonds offer a compelling combination of yield and potential price appreciation for aggressive investors who are willing to plug their noses and wade in. (See Afraid of Dividend Cuts? Buy Bonds.)

But the fall in oil prices and borrowing base redeterminations in the spring will almost certainly tighten credit for junk-rated companies. And keep in mind that the same financial institutions that have lent heavily to the energy sector may also participate in these funds.

At this point, evidence of systemic risk related to the goings-on in the energy patch has yet to emerge. But given the downside momentum we’ve seen in the recent selloff, such a catastrophe would take a serious toll on the market.

The risk of runaway momentum is a good reason to be cautious this holiday season. Value always wins out eventually. Companies that continue to grow their businesses and dividends eventually will achieve higher valuations.

But with a high level of fear in energy markets threatening to spread elsewhere, investors should be prepared for current market headwinds to be with us for a while. This year at least, Scrooge appears to be winning out over Santa Claus.