Dishing the Dirt on the Utility Sector’s Spin Cycle

Editor’s Note: This article originally appeared in the July issue of Conrad’s Utility Investor. For a limited time, you can save $20 on a risk-free trial of the ultimate wealth-building tool for individual and professional investors—just use the promo code “discount.”

Over the past 12 months, nine companies in our Utility Report Card have spun off some of their operations via initial public offerings (IPO). 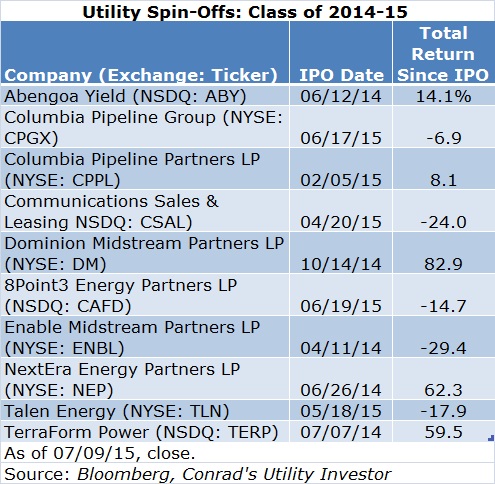 But the stock shrugged off these headwinds, delivering a total return of 82.9 percent. These impressive gains reflect the MLP’s guidance for annual distribution growth of at least 20 percent over the next four to five years.

Dominion Resources (NYSE: D), Dominion Midstream Partners’ sponsor, owns a sizable inventory of pipelines and other assets to drop down to the MLP, providing a highly visible source of cash flow growth that doesn’t hinge on energy prices.

Abengoa Yield (NSDQ: ABY) once again trades below our buy target after the stock’s recent pullback.

Management’s guidance calls for the spin-off to pay $1.60 per share in dividends this year, which equates to an implied yield of about 5 percent. Abengoa Yield also has a credible plan to grow this payout to between $2.10 and $2.15 per share in 2016, and management has targeted annual dividend growth of 12 percent to 15 percent thereafter.

The yieldco’s sponsor, Abengoa (Madrid: ABG, NSDQ: ABGB), continues to build new generation capacity and other infrastructure projects around the world. Abengoa Yield will enjoy the right of first offer on many of these assets, once they’re backed by long-term contracts.

Abengoa Yield’s stock has pulled back amid concerns about rising interest rates; the shares were due for a breather after rallying hard since the start of the new year. Take advantage of this pullback to buy Abengoa Yield up to $37 per share.

Shares of fellow yieldcos TerraForm Power (NSDQ: TERP) and NextEra Energy Partners LP (NYSE: NEP) have also retreated from their recent highs, despite solid growth stories. Unfortunately, both stocks haven’t slipped below our buy targets yet. TerraForm Power rates a buy when its shares dip to less than $35, while NextEra Energy Partners LP is a buy when its units fall to less than $37.

We remain skeptical of 8Point3 Energy Partners LP (NSDQ: CAFD) because of questions about whether First Solar (NSDQ: FSLR) and SunPower Corp (NSDQ: SPWR) plan to use the yieldco as a vehicle to build long-term value or a way to monetize assets and shift risky rooftop-solar contracts off their books.

The stock’s poor performance thus far suggests that we’re not the only ones with questions. 8Point3 Energy Partners LP rates a Hold until we have a better sense of management’s strategy.

But we’d like to see a little more trading history before we upgrade the stock to a buy, especially with MLPs likely to remain under pressure amid concerns about rising interest rates and the impact of slowing drilling activity on future growth. Columbia Pipeline Group rates a Hold.

Enable Midstream Partners LP (NYSE: ENBL) hasn’t fared well since its IPO, as the severe downdraft in crude-oil prices has slowed drilling activity in the Bakken Shale and Granite Wash, prompting management to scale back its guidance for capital expenditures, cash flow and distribution growth. Expected demand for processing and takeaway capacity in the MLP’s main growth areas also looks set to disappoint.

Although minimum volume commitments should enable Enable Midstream Partners to maintain its distribution, management has yet to articulate a growth strategy that works in the current environment. The resignation of CEO Lynn Bourdon came as a surprise and hasn’t helped investor sentiment.

Our decision to sell Windstream Holdings (NSDQ: WIN) last August for an almost 53 percent gain looks even better with each passing day. (See

Although the market initially reacted favorably when Windstream announced plans to spin off some of its network assets as a real estate investment trust (REIT), the transaction involved a stealth dividend cut of 40 percent.

Since Enron imploded in 2001, most US electric companies have sought to shift their revenue mix toward regulated operations by divesting their volatile wholesale-power operations.

The two latest moves in this direction include Duke Energy Corp’s (NYSE: DUK) sale of its remaining merchant power plants in the Midwest and PPL Corp’s (NYSE: PPL) spin-off of its wholesale operations as Talen Energy Corp (NYSE: TLN).

These divestments improved the utilities’ earnings visibility. Less clear is the investment appeal of the cast-off generation capacity, especially older coal-fired power plants that find themselves under pressure from cheap natural gas and environmental regulations.

Talen Energy doesn’t pay a dividend and will deploy its $1 billion war chest to acquire power plants that utilities have placed on the sales block. Potential targets include American Electric Power’s (NYSE: AEP) remaining merchant fleet in Ohio and Indiana.

The investment thesis for Talen Energy and its peers holds that conventional baseload power plants are undervalued in a market that’s gone cuckoo for high-priced renewable-energy that’s uneconomic without subsidies. That’s reason enough for investors to hold at least until Talen Energy reports first-quarter results. However, income-seeking investors are better off elsewhere.