Oil is second only to water as the commodity that’s most essential to a functioning 21st century global economy.

And thanks to technological and process innovations in North America, surging production from prolific shale oil and gas plays has contributed to a well-supplied global market.

The price of West Texas Intermediate crude oil has slipped since late June 2014, when it peaked near $108 per barrel on worries about supply interruptions in the Middle East. But the decline really didn’t start in earnest until early October, when concerns about slowing demand growth in China and other key markets emerged.

The retreat became a rout when OPEC and Saudi Arabia fired up their way-back machine to 1986 and announced plans to maintain their production levels rather than cutting output to support prices.

This approach helps the cartel to maintain its market share, while maximizing the pain for high-cost producers and accelerating the arrival of the next up-cycle. (See Oil’s Down-Cycle: Lessons from the Past.)

OPEC announced this decision on Thanksgiving, leading to a Black Friday sale in North America’s energy patch. This fire sale has continued throughout the holiday season, with exploration and production stocks suffering the most pronounced losses.

“Divergent Returns” lists the total returns posted by seven dividend-paying stock indexes and two bond indexes in the fourth quarters of 2013 and 2014. 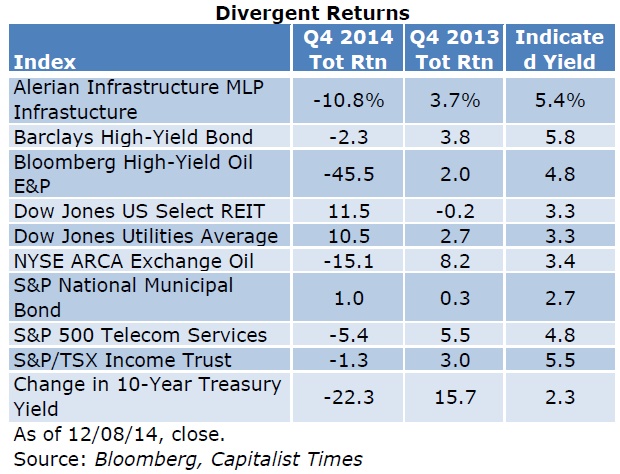 The Bloomberg High-Yield Oil E&P Index has absorbed the biggest blow, losing almost half its value since Sept. 30. This index includes many marginal producers with significant debt loads that the market has slammed the hardest.

Meanwhile, the NYSE ARCA Exchange Oil Index, which consists primarily of large-capitalization oil and gas producers, has also pulled back by 15 percent in the fourth quarter.

Plummeting oil prices have reignited concerns that capital expenditures at the major integrated oil companies are too high to support the dividend without taking on additional debt.

By and large, the midstream master limited partnerships (MLP) in the Alerian MLP Infrastructure Index don’t entail direct exposure to the plunge in oil prices, though a slowdown in drilling activity and production growth could affect the viability of future expansion projects.

The declines in these indexes have come at a time when the yield on 10-year Treasury notes has dropped by 22 percent, underscoring the importance of company- and industry-specific trends to equity performance.

At the same time, the drop in oil prices should exert a stimulatory effect on the US economy, giving utility stocks and real estate investment trusts (REIT) a bit of a boost. Income-seeking investors rotating out of high-yielding energy stocks should also gives these securities some added momentum.

Ironically, utility stocks and REITs were at or near the bottom of most investors’ buy lists at the beginning of the year because of two mistaken assumptions:

Like most equities, REITs and utility stocks track the health and growth of their underlying businesses over the long haul.

Regulated electric and gas utilities usually pass through changes in fuel costs to customers, though Northwest Natural Gas (NYSE: NWN) and a handful of other names in my Utility Report Card are rewarded for controlling fuel costs.

Lower energy costs also make it easier for many utilities to pass through capital expenditures into their rate base, which drives earnings growth.

The Dow Jones Utilities Average includes several companies that generate a significant chunk of their earnings from unregulated power markets, where prices fluctuate with swings in natural-gas prices. But even the biggest player in wholesale power, Exelon Corp (NYSE: EXC), boasts a sizable presence in regulated markets.

And in many regions, wholesale power markets have received a boost from the closure of older coal-fired power plants, a trend that has heightened reserve margins and raised prices despite weak natural-gas prices.

Markets hate instability and uncertainty. Until crude-oil prices stabilize, every negative development has the potential to send energy stocks even lower.

Across-the-board selling of energy stocks creates opportunities. In the near term, investors should avoid the falling knives and focus on names caught up in the selloff whose growth stories don’t rely on oil prices. (See Game Plan for Lower Oil Prices.)

Although the time to buy oil and gas producers hasn’t come yet, best-in-class operators that own high-quality acreage and have bulletproof balance sheets—the industry heavyweights—will use this down-cycle to consolidate and build for the future.

Shares of US independent refiners have largely held their value during the selloff, as the abundance of low-priced crude oil bolsters their profit margins. Meanwhile, intermittent pullbacks in the MLP space have created opportunities for savvy investors to add to or establish positions in high-quality names.

Elliott Gue and I outlined our top picks for the energy pullback in the most recent issue of Energy & Income Advisor.

Lesson No. 2: Balance and Diversify

Although the energy patch still offers solid opportunities for income-seeking investors, the recent selloff serves as a reminder why it’s important to build a diversified portfolio that isn’t overly focused on a specific sector.

Investors who also hold significant positions in REITs and utility stocks, for example, likely will post decent returns this quarter even if their energy positions took a big hit.

Looking to diversify your income stream? Consider Canadian REITs, high-yield bonds and telecom stocks. You’ll need to do your homework and be selective—all three areas contain their fair share of value traps—but savvy investors can score above-average yields and the potential for price appreciation.

Weakness in the Canadian dollar and concerns about emerging overcapacity in some segments of Canada’s property markets present headwinds for REITs headquartered north of the border. Although dividend growth in this space may stagnate, conservative management should limit the risk of payout cuts. (See Canadian REITs: Unloved Unreasonably.)

In the telecom space, smaller competitors with inferior networks have sought to win market share by slashing prices, an approach that has helped to add customers but hasn’t pushed these companies any closer to profitability.

Earlier this year, we booked gains of more than 50 percent when we sold two regional telecom stocks in Conrad’s Utility Investor. (See An Early Birthday Present from Windstream Holdings and Book a 54% Gain in Consolidated Communications.)

But this space contains its fair share of duds. In fact, we’ve maintained our Sell ratings on Windstream Holdings (NSDQ: WIN) and Consolidated Communications (NSDQ: CNSL) after cashing out of these names.

T-Mobile US (NYSE: TMUS) has agreed to pay $56 million in cash for NTELOS Holdings’ wireless spectrum in eastern Virginia. However, the divestment will reduce the regional telecom’s annual cash flow by $25 million to $30 million and saddle the firm with $55 million in costs related to winding down its other operations.

Why do this deal? With its $91 million market capitalization, NTELOS Holdings is too small to compete on capital expenditures—the key to network quality and longevity in the telecom game.

Despite bringing in almost $120 million in revenue last quarter, the embattled telecom outfit couldn’t afford the $100 million in capital expenditures that management deemed necessary to compete in these urban markets. Beating a swift retreat was the only option.

NTELOS Holdings’ plight should serve as a warning for investors tempted by the big yields offered by some regional telecoms; up until last year, the company’s sales remained steady enough to support a fat dividend.

But the growing need for investments in its network forced management to revise its operating deal with Sprint Corp (NYSE: S), which marked the beginning of the end for the company’s dividend. The best-case scenario for shareholders would be a take-under.

Bargains are harder to come by in the REIT space and utility sector, though savvy investors can find opportunities.

In Conrad’s Utility Investor, we recently landed a 35 percent gain in Hawaiian Electric Industries (NYSE: HE), an underappreciated turnaround story that we added to our Aggressive Income Portfolio in July 2014. Evidently, NextEra Energy (NYSE: NEE) agreed with our assessment, offering to buy the company at a roughly 20 percent premium.

As for REITs, the latest issue of Capitalist Times Premium digs through the laggards and finds two reasonably valued names that offer above-average yields and could offer significant upside. (See Digging for Value in the REIT Space.)