Energy and the Bear

Many readers worry that a bear market could be in our immediate future, citing a number of causes for concern.

Market volatility explains why investors have grown more skittish. Not long ago, the S&P 500 swooning by 30 points in a single trading day would have been an unusual move. However, the growing dominance of the Big Money in daily trading has made swift pullbacks of this magnitude a fact of life for ordinary investors.

Of course, trading action can only resist fundamentals for so long. And the Big Money can make colossal errors.

At the same time, the bull market that began in March 2009 has reached the age when most rallies peter out. The S&P 500 has almost tripled in value from its March 2009 low to its April 2014 high, and the index now trades at more than 18 times earnings. These lofty valuations imply a high bar of expectations for future growth.

Valuation explains why the information technology sector sold off last week; investors worry that these high-flying stocks have outstripped their underlying fundamentals.

Concerns about China’s slowing economic growth could also cause a downdraft in the stock market, especially in cyclical names leveraged to the world’s quintessential emerging market.

Chinese Premier Li Keqiang warned that the Mainland’s gross domestic product (GDP) may not hit the official growth target of 7.5 percent this year, which doesn’t bode well for the global economy or many commodity producers.

The resource giant depends heavily on sales of iron ore, coal and copper to China, while the value of its home currency, the Australian dollar, tends to fluctuate with the Mainland’s growth prospects.

Against this backdrop, news will have to worsen significantly to send these already out-of-favor stocks lower. My colleague Yiannis Mostrous highlighted the best bets in this beaten-down industry in Mining for Value: A 2015 Story.

Although investors should form an outlook on oil and gas prices to get ahead in the energy space, wedding this top-down outlook with an understanding of individual companies drives outperformance.

This approach has enabled Energy & Income Advisor’s three portfolios to top their benchmark indexes over the past six months:

The most recent issue of Energy & Income Advisor focused on supply and demand trends in the global market for liquefied natural gas (LNG), a niche business that has captured the imaginations of US investors.

Many investors salivate over the wide spread in commodity prices between North America, which has more than enough production, and Asia, where natural-gas prices track the price of Brent crude oil. 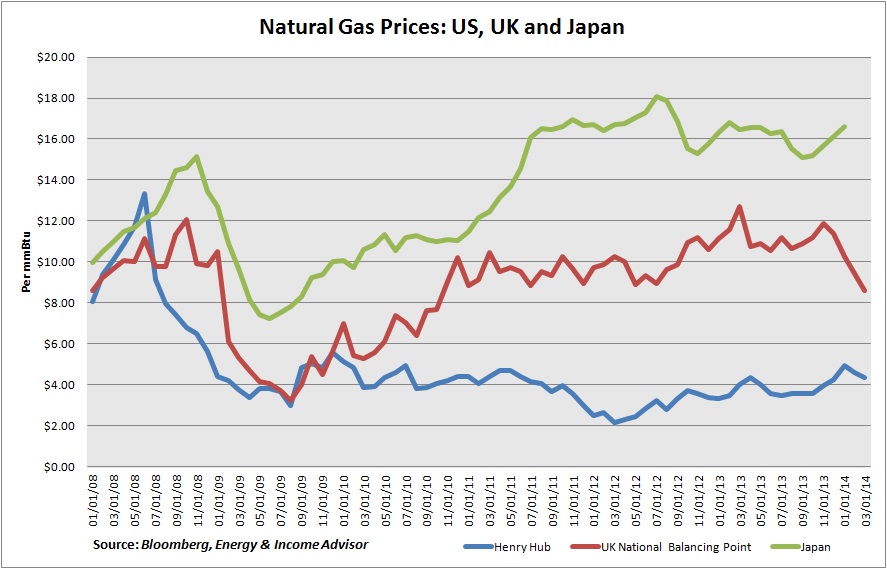 The highly publicized political debate over whether the Dept of Energy would approve proposed export schemes to ship US natural gas overseas likewise raised this niche industry’s profile among American investors.

One stock in particular, Cheniere Energy Partners LP (NYSE: CQP), has been bid up to an insane valuation that prices in everything going according to plan–and then some.

But the global LNG market has a lot of moving parts that can potentially make or break companies; we prefer names that offer exposure to the future promise of LNG exports, but also stand to profit from real growth opportunities today.

Be sure to check out our latest free video, The Smart Play on LNG: Don’t Buy Cheniere Energy Partners, to learn more.

Meanwhile, some of our favorite names trade at appealing valuations and boast superior near-term upside to this overhyped name.

Investors who worry that the energy sector would take a hard hit in any pullback should note its relative resilience in recent bear markets. Our table tracks the performance of several energy-related stock indexes during the two previous pullbacks. 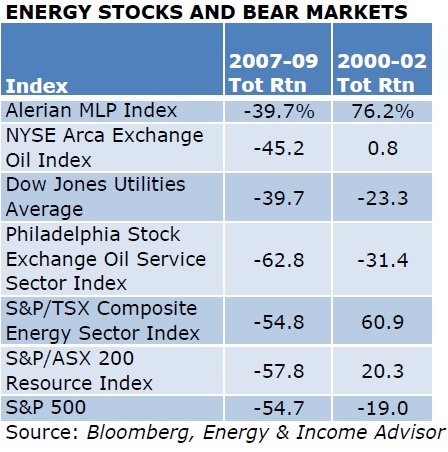 The first takeaway from this table: The 2007-09 bear market hit every security class hard, with the exception of bonds. That’s because energy stocks–including dividend-paying utilities and master limited partnerships–follow the market and the economy.

But many energy-related indexes rallied during the 2000-02 bear market, with the exceptions of the highly cyclical Philadelphia Stock Exchange Oil Services Stock Index and the The Dow Jones Utilities Average, which pulled back because of Enron’s implosion.

Even then, however, strong energy companies weathered the storm and were among the first out of the gate when the bull market began.

And names that generate a stream of reliable cash flow from long-term contracts maintained or even raised their payouts during the crisis.

Don’t count us in among the doomsayers forecasting a repeat of the credit collapse that triggered the Great Recession.

In fact, the more bears we hear mumbling, the more convinced we become that the current bull market continues to climb the proverbial wall of worry–and can run for a while yet.

The 2007-09 credit crunch and financial crisis occurred because so many businesses, individuals and governments were levered to the hilt in the belief that a collapse couldn’t possibly happen. This situation is worlds away from the current mindset of de-leveraging and de-risking, which even most governments now share.

Another bear market will emerge at some point, caused by an unsettling development in the margins that’s outside most people’s field of vision while the market climbs higher.

But investing or not investing based on some vague notion of a future calamity is a loser’s game.

Instead, buy high-quality names when they trade at low prices and consider selling when fundamentals deteriorate or valuations become stretched.

And you can still find bargains in today’s market, though you need to do more digging than in recent years.

One of our top turnaround plays in Energy & Income Advisor recently caught an upgrade from analysts at four major investment banks, suggesting that institutions have started to catch on to this 7.5 percent yielder’s growth story.