Earnings, not interest rates, will drive returns for dividend-paying stocks in 2015 and beyond.

Nevertheless, most investors remain fixated on when the Federal Reserve will hike interest rates, though there’s a great deal of dissent about what factors will induce the central bank to make this move.

The majority of the Federal Reserve’s Board of Governors has gone on record supporting efforts to normalize interest rates. However, the current environment shares little in common with any decade since World War II.

For one, most countries find themselves contending with deflation, not inflation. At the same time, the US dollar’s value has soared since the Federal Reserve articulated its intention to raise interest rates. Uncle Buck’s strength has weighed on US economic growth, with last month’s disappointing job numbers providing the latest evidence.

But hiking interest rates at a time when the US dollar continue to rally and the economy shows signs of softness could bring unintended and unexpected consequences.

If the Fed Acts

No matter what the Fed does, investors need to keep in mind the chief lesson from “Dividend-Paying Stocks and Interest Rates”: Over the past two decades, the annual returns generated by income-oriented equities have exhibited little correlation to changes in benchmark interest rates. 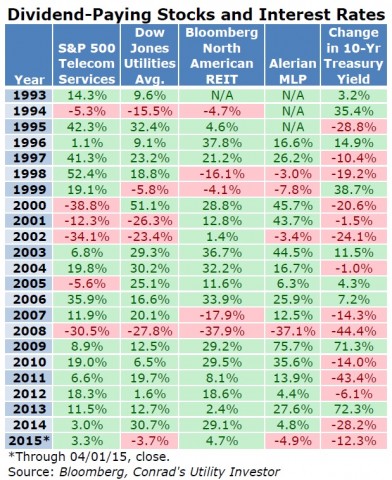 All four equity indexes listed in our table posted gains in 2009 and 2013, years when the yield on 10-year Treasury bonds soared by more than 70 percent. Meanwhile, these popular dividend-paying stocks suffered their worst losses in 2008, when the benchmark yield fell by almost 50 percent.

Worries about rising interest rates usually trigger knee-jerk selloffs in dividend-paying stocks, and these pullbacks that can scare off weaker hands.

Nevertheless, full-year returns for these equities tend to track the economy’s health, giving them as good a chance of posting a gain when interest rates rise as they do when benchmark borrowing costs decline.

The real risk to stock prices isn’t the Federal Reserve’s monetary policy; rather, the threat centers on whether the central bank’s actions to address inflationary pressures inadvertently weaken the economy by raising the cost of capital or propel the US dollar even higher, eroding the competitiveness of US exports.

At this point, neither the Fed’s actions nor lack thereof has increased companies’ cost of capital from the lowest level in decades. For example,the Texas unit of American Electric Power (NYSE: AEP)—one of the more than 200 essential-services stocks I cover in my Utility Report Card—on March 23 issued 30-year debt at a 3.9 percent coupon.

As long as corporate borrowing rates remain this low, utilities and other capital-intensive companies will have a powerful catalyst for earnings growth. Ultimately, the economy’s health and capital costs matter more than whether the central bank raises the federal funds rate to 0.625 percent or 1.125 percent and when this move occurs.

What about the short term? The conventional wisdom that dividend-paying stocks must sell off after the Fed raises interest rates won’t go away anytime soon. Toward the end of January 2015, traders used growing concerns about rate hikes as an opportunity to take profits in utilities, a sector that delivered huge outperformance last year.

On the other hand, the 10-year Treasury bond still offers a lower yield than at the year’s outset. But Alerian MLP Index and the Dow Jones Utilities Average are underwater thus far in 2015. The S&P 500 Telecommunication Services Index drifted lower to start the year, but then rallied in early February.

Common sense suggests that other factors trumped interest rates. Telecom stocks bounced because earnings beat expectations, while the Alerian MLP Index ticked up when energy prices found a temporary bottom. Utility stocks were due for a correction after outperforming in 2014.

This action suggests we could see something altogether different than the dividend-paying stock selloff that the consensus expects if the Federal Reserve throws caution to the wind and starts raising interest rates.

One strong possibility is a flight to safety, including 10-year Treasury bonds. Other likely beneficiaries include some of our Conservative Income Portfolio holdings; we’ll continue to monitor these names in case they reach levels where it makes sense to take profits off the table.

In that event, we’ll send an Alert to readers to sell at least a portion of their position; we can always return when sentiment shifts and valuations retreat to levels that reflect reasonable expectations for growth.