How Low Will Utility Stocks Go?

The conventional wisdom that rising interest rates reduce the value of dividends has trained investors to sell income-oriented equities when the Federal Reserve tightens monetary policy. Recent articles in the Wall Street Journal suggest that quite a few investment professionals share that view, even though they should know better.

With the yield on 10-year Treasury bonds spiking to 2.85 percent from 2.3 percent a few months ago, utility stocks have encountered some knee-jerk selling pressure. This near-term headwind could continue to buffet the sector and other dividend-paying equities if bond yields continue to head higher.

No matter how severe the selling pressure becomes, investors should remind themselves that this weakness will be temporary—and that the subsequent recovery will be lucrative.

Check out our table tracking the Dow Jones Utility Average’s performance during past periods of rising interest rates. Several data points stand out. 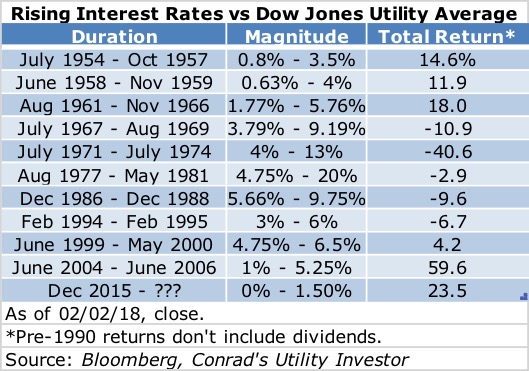 The Federal Reserve increased interest rates by 425 basis points from June 2004 to June 2006; the Dow Jones Utility Average generated a total return of almost 60 percent over this period—roughly 4 times the gain posted by the S&P 500. Of course, the magnitude of this outperformance stems in large part from the Dow Jones Utility Average recovering from the crippling 2001-02 bear market.

Nevertheless, the sector only finished these previous tightening cycles appreciably lower when the overall stock market suffered a steep correction.

Readers should also note that very few of the double-digit pullbacks that the S&P 500 Utility Index has suffered since World War II have coincided with the Fed increasing interest rates. 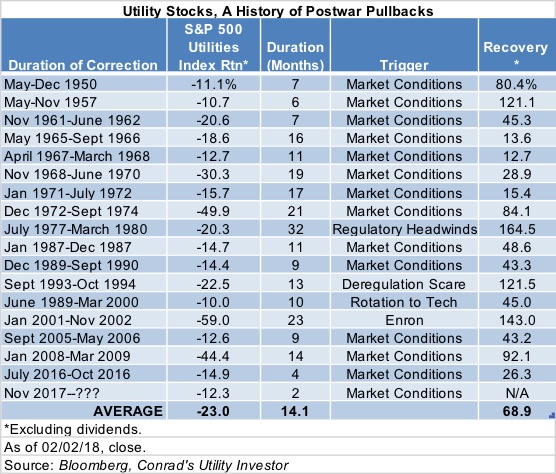 The 1994 pullback stemmed primarily from fears of deregulation, while the 1999 selloff was the mildest decline in our table.

In fact, many of the largest declines suffered by utility stocks occurred when the Fed slashed interest rates in earnest to stave off an economic collapse.

Rising interest rates can increase utilities’ borrowing costs, but more than a decade of systematic refinancing and pushing out maturities should enable utilities to step away from the bond market if conditions tighten. Meanwhile, many utilities’ bonds trade at record-low yields to maturity, meaning that the capital markets remain wide open despite two years of the Fed bumping up short-term rates.