Key Themes for the Second Half of 2015

Investors should also consider and prepare for an alternative scenario where the Dow Jones Utilities Average’s strong returns in January fail to prevent the index from finishing the year in the red.

Several potential headline risks lurk in the background. The Federal Reserve could raise interest rates, strengthening the US dollar, crimping American exports and ratcheting up the pressure on developing economies. Other risks include a breakdown in Greece’s negotiations with the EU and a further deceleration in China’s economic growth rate.

Our table tracks the handful of instances when the Dow Jones Utilities Average posted a positive return in January, but finished the year with a loss. In some cases, these corrections coincided with retrenchments in the broader market. 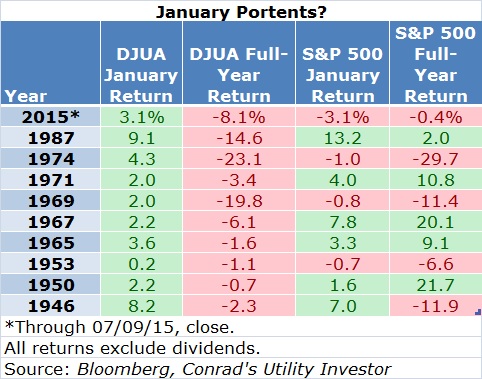 The two most recent entries in this historical record—the 1974 and 1987 selloffs—differ from the present day in that commodity prices surged and inflation ran rampant during these years.

However, two commonalities between these past swoons and our current situation stand out: a lot of talk from the Federal Reserve about raising interest rates and the consensus expectation that the central bank would act on these plans.

In 2015, the yield on the 10-year Treasury bond has climbed to 2.42 percent from a low of 1.65 percent, a trend that has weighed on US equities, especially those that pay dividends.

On the plus side, investment-grade corporations can still access the bond market at low interest rates, though issuers have shifted their focus to short-term debt and delayed longer-term financing. Ready access to low-cost capital supports investment in new projects to fund future earnings growth.

But given the macro uncertainty and the heightened potential for a correction in the broader market, investors should take some profits off the table in their big winners and focus on easing into high-quality names on dips.