At the same time, rumors have circulated that Liberty Media Corp, which owns almost 20 percent of Charter Communications, has explored the purchase of T-Mobile US (NSDQ: TMUS). Sprint Corp (NYSE: S) is also reported to be readying an offer for the third-largest wireless provider in the US.

AltaGas’ (TSX: ALA, OTC: ATGFF) all-cash offer of $88.25 per share for gas WGL Holdings (NYSE: WGL) has reignited takeover speculation for the handful of independent gas distributors that remain in the US. These inflows have resulted in frothy valuations.

And several water utilities trade at almost 40 times trailing earnings, in anticipation of another wave of consolidation.

The search for scale and lower costs of capital is also on in the midstream space, where ONEOK’s (NYSE: OKE) purchase of ONEOK Partners LP (NYSE: OKS) marked the latest simplification transaction.

Even depressed yieldcos and independent power producers could be on the sales block.

Many of the 14 takeovers in our table involve like acquiring like in an effort to add scale and revenue. 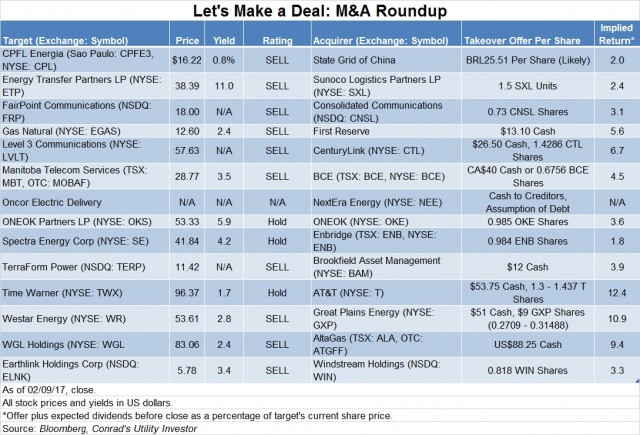 But recent deal flow has also involved an increasing number of Canada-based utilities and midstream operators seeking to establish a new growth platform and add exposure to the US dollar. Private-equity outfits have also stepped up the plate, usually in deep-value situations. Even state-run enterprises in China have entered the fray.

Access to inexpensive capital has fueled the latest boom in deal-making. Despite the Federal Reserve’s plan to continue raising interest rates, even junk-rated corporate borrowers can issue bonds relatively inexpensively.

President Donald Trump’s pro-business stance and perceived lenience on mergers and acquisitions have encouraged speculation that combinations rejected by previous administrations could go through.

In December 2016, we highlighted 15 names in our Utility Report Card as potential takeover targets. (See Deal Talk.) In the intervening months, one of these companies—WGL Holdings—agreed to an offer.

And several stocks on our list have rallied to levels that would have been hit if they had accepted a takeover bid.

Investors looking to bet on mergers and acquisitions should only buy potential takeover targets that can still help you build wealth if they remain independent.