Sick and tired of energy dividend cuts? We wish we could say otherwise, but unless energy prices rally dramatically and relatively soon, the cascade we’ve seen so far isn’t over by a long shot. And even companies that have already slashed their payouts are still in danger.

West Texas Intermediate (WTI) crude oil has plummeted by more than $55 per barrel since mid-summer 2014, the sharpest drop since the collapse in late 2009. Surging production and an unusually warm winter (thus far) have also weighed on US natural-gas prices, while the prices of natural gas liquids such as propane and butane have also beat a hasty retreat. 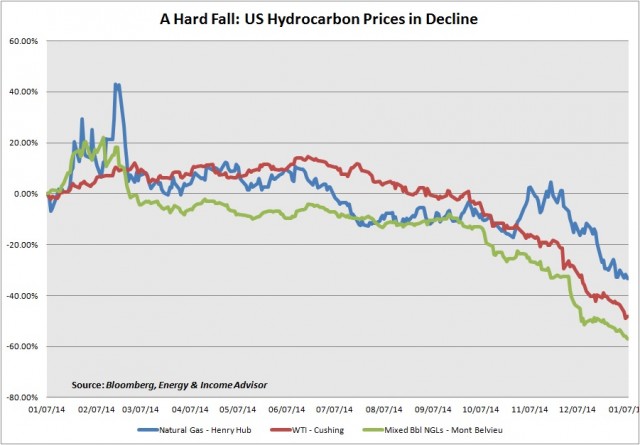 Not surprisingly, even producers that have heavily hedged future output have made big adjustments to their capital spending plans. Expect this trend to continue as oil and gas producers announced fourth-quarter results and guidance for 2015.

Linn Energy LLC (NSDQ: LINE), the largest upstream MLP by market capitalization, recently slashed its monthly distribution by 57 percent. However, more pain could be in store if commodity prices fail to rebound.

The partnership’s guidance assumes that WTI will average $60 per barrel this year and natural gas will average $3.50 per million British thermal units. These assumptions aren’t unreasonable and align closely with consensus expectations.

Breitburn Energy Partners LP (NSDQ: BBEP) also slashed its distribution by more than half last year and issued guidance underpinned by the same price deck for crude oil and natural gas as the one used by Linn Energy.

Canadian Oil Sands’ (TSX: COS, OTC: COSWF) operating costs exceeded CA$45 (US$38.09) per barrel, an onerous lodestone that made the oil and gas producer’s more than 40 percent dividend cut an inevitability.

However, the sustainability of this new dividend assumes WTI will average US$75 per barrel in 2015—an aggressive price point that involves a great deal of wishful thinking.

In fact, each of the 11 Canadian oil and gas producers that have cut their dividends since last summer based their 2015 spending and output guidance on WTI prices averaging between $65 and $70 per barrel this year.

Reaching either level will require a 35 percent recovery in both oil and natural-gas prices. But neither Penn West Petroleum nor Canadian Oil Sands expects much of a decline in hydrocarbon output.

Last week’s Energy & Income Advisor delves into the prospects for Canada’s oil and gas producers—not surprisingly, most remain in the danger zone. The issue is a must-read for investors looking to identify the next cutters and the few pockets of opportunity north of the border. (See International Coverage Universe: Picks, Pans and Strategy for 2015.)

On a positive note, stocks have already priced in a great deal of the bad news. And the time will come when consolidation in the space picks up.

At this point, however, would-be acquirers won’t feel any pressure to do deals until energy prices bottom. Expect asset acquisitions to predominate in the near term, as distressed producers seek to raise capital by divesting noncore assets and buyers look to avoid the risks associated with absorbing whole companies.

In this environment, no one should count on a merger to bail out a foundering energy producer, especially at a decent premium.

More dividend cuts will be in order if companies’ assumptions for oil and natural-gas prices don’t pan out. Some companies will also slide into bankruptcy.

But precipitous drops in energy prices sow the seeds of their own reversal, spurring consumption increases on the demand side and reining in high-cost production on the supply side.

This time around, Asia’s sagging economies will receive a big left from cheaper oil, which eventually will spark demand. As for supply, prices will need to move higher support the drilling activity necessary to offset steep decline rates on shale wells and balance the market.

However, the market has yet to show signs of recovery, though the rate at which oil prices have declined has slowed in the new year.

What’s an investor to do? In Energy & Income Advisor’s Model Portfolios, we’ve hedged our exposure with names that stand to benefit from lower oil prices and steered our subscribers to growth stories in the energy sector that don’t depend on the direction of commodity prices. (See The Demand Side Beckons and Game Plan for Lower Oil Prices.)

Last summer, midstream MLPs commanded premium valuations, thanks to their above-average yields, tax advantages and exposure to the US shale oil and gas revolution.

Even with crude oil off by almost $60 a barrel in some parts of the country and natural-gas prices down sharply over the past year, our favorites aren’t at immediate risk of a distribution cut.

Moreover, backlogs of commercially secured projects should drive cash flow growth in the near term, though declining volumes in some basins and lower commodity prices will reduce the number of future growth projects.

Investors should focus on the larger midstream names that own indispensable takeaway capacity and will drive industry consolidation in coming years.

Upstream operators remain an important part of a balanced energy portfolio, though the opportunity to buy these names has yet to arrive. When the time comes, investors should focus on names with high-quality assets, solid balance sheets and management teams with their wits about them.

The selloff in bonds issued by upstream names also creates opportunities for aggressive investors willing to bet on credit-improvement stories.

In this environment, investors should be wary of pundits touting the same strategy as two to three years ago or basing their picks on historical data instead of current realities. Caveat emptor!