Picks and Pans for the New Year

Although only nine water utilities trade publicly in the US, these companies’ prospects vary widely.

Names operating in California have underperformed because of concerns that the drought in the state will strain relations between utilities and regulators. Thus far, surcharges granted by regulators have helped to limit utilities’ exposure to sharp declines in water consumption.

But the more consumers pay for water, the more tenuous this arrangement becomes. Rate lag associated with regulatory delays represents another risk, while elevated valuations for many water utilities in California increase the downside potential embedded in these stocks.

Aqua America (NYSE: WTR), one of our Top 10 Drips, trades above our buy target of $26 per share. But the stock remains the best play on ongoing consolidation in this highly fragmented industry.

The need for massive capital expenditures to meet the Environmental Protection Agency’s (EPA) clean water standards will only fuel the urge to merge. Many of the 69,000 independently operated water and wastewater systems in the US will struggle to fund these expansions and improvements. And the municipal systems that prove 85 percent of US water and 97 percent of wastewater services in the US won’t fare much better. 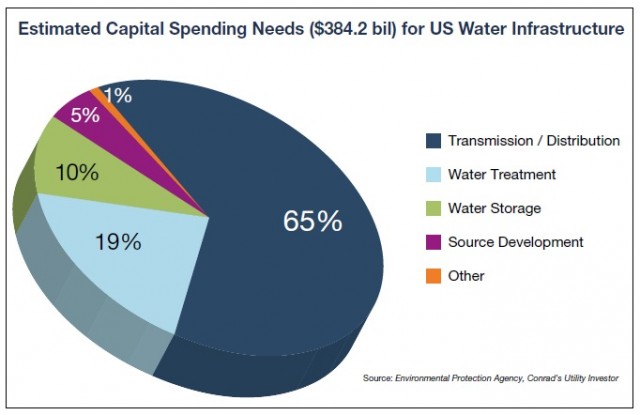 Aqua America and American Water Works (NYSE: AWK), which boast a combined market capitalization that amounts to 80 percent of the total for publicly traded water utilities, will drive much of this consolidation. Both companies have strong balance sheets and proven track records of successfully integrating acquisitions.