These actions, coupled with other policy announcements, signal a turn toward laissez-faire environmental regulation. Although we welcome the rally in longtime favorite TransCanada Corp’s (TSX: TRP, NYSE: TRP) stock, we remain skeptical of a new boom in pipeline construction.

Regulatory risk and permitting delays can increase the cost of building a pipeline; midstream operators consider these factors when deciding whether a particular project makes economic sense.

However, securing ample capacity reservations from shippers and lining up financing are arguably more important to making a final investment decision. Insufficient demand or expensive funding will doom any project, regardless of the regulatory backdrop.

With US oil production once again picking up steam, demand for takeaway capacity in the Permian Basin and emerging SCOOP and STACK plays in Oklahoma’s Anadarko Basin will create opportunities for midstream operators. However, reduced drilling activity in the Eagle Ford Shale and other areas decreases the need for new pipelines and creates volumetric and re-contracting risk for companies that operate in these basins.

Overcapacity shouldn’t be an issue for Keystone XL, which will transport heavy crude produced in Alberta’s oil sands to the US; insufficient takeaway capacity has weighed on Canadian producers’ price realizations for some time. The same goes for Dakota Access, which should take market share from crude-by-rail operations in the Bakken Shale.

But Keystone XL was conceived and contracted when oil prices traded above $100 per barrel; prospective customers could push for lower rates, which could result in lower returns than TransCanada originally had envisioned.

Much of the construction activity in the pipeline space will focus on areas where wide price differentials create an incentive to build new takeaway capacity and where robust production growth increases demand for additional outlets. For example, Kinder Morgan’s (NYSE: KMI) biggest project, the recently approved Trans Mountain pipeline, will ship heavy crude oil produced in Alberta to the Pacific Coast for export to Asia.

Despite all the rhetoric about infrastructure spending and pipeline construction, lighter federal regulation could indirectly result in delays for some projects.

Although the federal government has a say in which pipeline projects move forward, state-level opposition drives far more delays—especially in the Northeast.

Contrary to the prevailing narrative, the Obama administration rarely met an oil or gas pipeline it didn’t like; Dakota Access and Keystone XL’s cross-border portions were the only major pipeline projects rejected over those eight years. 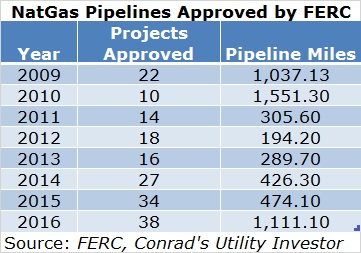 During President Obama’s first year in office, the Federal Energy Regulatory Commission (FERC) approved every gas infrastructure project that it inherited from the previous administration and the eight new applications.

Depressed natural-gas prices led to a corresponding drop in the number of applications FERC received over the next few years, though the time needed to render a decision declined.

Over the next six years, the number of natural-gas pipelines securing permits increased steadily, peaking at 38 in 2016. The average time elapsed from initial filing to final approval hovered around six months, while the total length of approved projects also reached a six-year high of 1,110 miles.

And these figures understate the extent of the midstream build-out; our table excludes projects that involved adding compression capacity to expand throughput on existing pipelines.

But FERC doesn’t regulate the construction of oil pipelines, with the exception of those that cross federal lands or national boundaries. At the same time that the Obama administration halted the construction of Dakota Access, two pipelines transporting crude oil to Mexico—Trans-Pecos and Comanche Trail—secured regulatory approval.

From 2010 through 2015, the US built the equivalent of 10 Keystone XL pipelines. Meanwhile, the Obama administration initially favored Dakota Access and the cross-border segment of Keystone XL; only after state and local opposition turned these projects into national issues did policymakers elect to shelve both projects.

Although Keystone XL and Dakota Access turned into political footballs, state and local authorities have delayed several important projects in the Northeast.

In July 2016, FERC extended its approval for the Constitution pipeline, which would carry natural gas from the Marcellus Shale to other markets in the Northeast. But New York state regulators have stymied the project by refusing to grant a water-quality permit. Although FERC can extend its approval of the Constitution pipeline under Trump, its opponents show no signs of backing down.

Meanwhile, the Massachusetts Supreme Court blocked Spectra Energy Partners LP’s (NYSE: SEP) Access Northeast project because the pipeline would have been funded, in part, through a charge on customers’ electric bills.

With the federal government now perceived as a pipeline supporter, expect opponents to become increasingly strident in coming years. And on-site demonstrations are the least of developers’ concerns, especially with opponents stepping up their donations to environmental organizations eager to tie up pipeline projects in court.

Given their high profiles, Dakota Access and Keystone XL will remain flashpoints for protests and court challenges.

The cross-border segment of Keystone XL, for example, still faces the same challenges in Nebraska that derailed the project the first time, including disputes over land rights, eminent domain and water quality. And don’t forget about lawsuits from well-funded groups that opposed the project on grounds that it will encourage development of Alberta’s oil sands.

Keystone XL also faces potential challenges arising from President Trump’s promise to renegotiate the terms of approval, including a potential requirement to use only US-manufactured steel. Such a move would require TransCanada to replace roughly half of the pipe already purchased for the project.

But TransCanada has a sizable backlog of investment opportunities, including a pair of major natural-gas pipelines that FERC approved on Jan. 19. These low-risk projects are secured by long-term contracts and boast a nameplate capacity of 2.5 billion cubic feet per day. Why court the unnecessary risks associated with Keystone XL when other projects continue to fly under the radar?

Under the right conditions, TransCanada could pursue Keystone XL’s cross-border segment. But the company also has enough opportunities on its plate to drive annual dividend growth of 8 to 10 percent over the next five years.

Investors face a similar question with Energy Transfer Partners LP (NYSE: ETP), the driving force behind the Dakota Access pipeline. Why buy units of an overleveraged midstream operator with significant headline risk when you could build a position in Spectra Energy Partners, which continues to grow its distribution by 8 percent annually?

The January issue of Conrad’s Utility Investor highlights my top picks for 2017 across the range of industries in our coverage universe, including my favorite pipeline pick and the best US electric utility, global utility and telecom. This issue also includes my top pans for the coming year–stocks that we expect to underperform handily.

My top picks for 2016 generated an average total return of 22.6 percent, while my pans posted an average gain of 2.1 percent. Don’t miss out on my top picks and pans for 2017. Subscribe to Conrad’s Utility Investor today.