Scottish Independence and Other Wild Cards

If you own stocks for yield, your first priority always has to be the health and growth of the underlying companies in your portfolio. These factors ultimately determine the sustainability of the dividends you’ll receive and, by extension, the capital appreciation you can expect over time.

Occasionally, however, an external event can change a company’s prospects for the better or the worse.

In early 2011, the market confronted two black swans, or unpredictable events that can rapidly destroy shareholder value: the disaster at the Fukushima Daiichi nuclear power plant and the Libyan civil war.

Neither event exerted a sustained effect on the broader stock market; the S&P 500 has generated a total return of 72 percent since the start of 2011.

However, that’s not to downplay their political and social ramifications and implications for specific industries–to say nothing of the tragic loss of life.

The ongoing political stability in Libya has made the country’s hydrocarbon output subject to frequent disruption, a headwind for some oil-field services firms and a source of volatility for oil prices.

Nevertheless, surging hydrocarbon production in North America has helped to moderate the effect of supply outages in Libya and the Middle East, as well as delays in developing complex offshore fields.

This event also prompted countries to reconsider the safety of their operating nuclear power plants and the wisdom of building more reactors. Germany, for example, plans to shut down all its nuclear reactors by 2022.

But these international developments haven’t stymied SCANA Corp’s (NYSE: SCG) construction of a new AP1000 nuclear reactor in South Carolina and a similar expansion to Southern Company’s (NYSE: SO) facility in Vogtle, Georgia.

The latter received an unexpected boost this summer, when a group led by Reverend Al Sharpton showed up at a hearing about the nuclear power plant’s water use and demanded that the facility continue to run despite its alleged impact on fisheries.

One wild card investors should monitor is Scotland’s Sept. 18 vote for independence.

Long dismissed as a harebrained scheme, the push for Scottish independence has gained steam since mid-July; recent polls suggest that the outcome of this vote remains too close to call.

This uncertainty has weighed on the British pound, which has dropped from US$1.72 to about US$1.63. The currency could slide another 10 percent if Scotland decides to go it alone, hitting the US dollar of London-listed stocks. 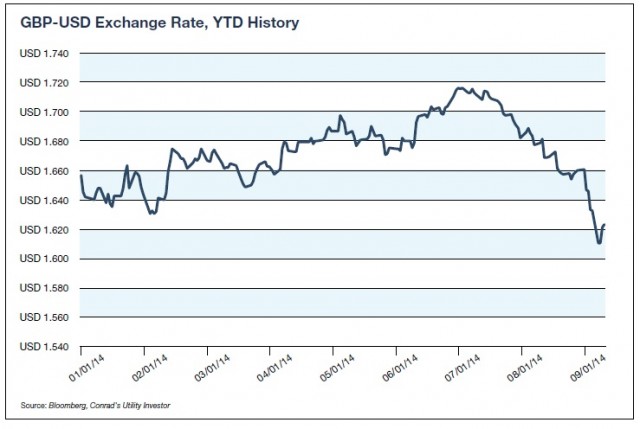 Companies that own vital infrastructure and resources—utilities, telecoms and oil and gas producers—have a unique exposure to political developments in the nations where they operate. When the business environment deteriorates, these companies can’t pull up stakes. And adverse regulation can cut the legs out from under these businesses.

Some warn that an independent Scotland could suffer an economic contraction of 4 percent to 5 percent, fueled by softening oil prices, less diversification, the loss of UK defense-related jobs, a possible bank exodus and the need for commerce to hurdle a new national border.

Telecoms have also warned that Scots could face higher wireless phone charges in many areas; independence would end the practice of charging the same fees across the UK, regardless of population density.

Scotland could also find itself outside the EU for a period, as Continental leaders worry that admitting the newly independent nation immediately would encourage Catalonia and other restive regions to secede from their parent countries.

If the push for Scottish independence fails, expect the British pound to rebound, boosting the value of British stocks in US dollar terms.

What implications would Scotland leaving the UK have for the more than 200 essential-services stocks that I track in my Utility Report Card?

Let’s start with BP (LSE: BP, NYSE: BP) and the other Super Oils. These companies have a long track record of operating across international borders; we’d be more concerned about BP’s legal trouble in the US and economic sanctions against Russia, two headwinds that likely will prove more disruptive than an independent Scotland.

Meanwhile, Telefonica (Madrid: TEF, NYSE: TEF) and the telecom industry should benefit from being able to align the cost of servicing Scotland’s sparsely populated areas with incoming revenue.

That being said, the country accounts for a relatively small portion of Telefonica’s sales; even in the worst-case scenario, an independent won’t have much of an effect on the company’s earnings.

Centrica (LSE: CNA, OTC: CPYYY) has double exposure through its ownership of British Gas and retail operations in the UK. National Grid (LSE: NG, NYSE: NGG) would also find itself operating across the newly formed border.

On the other hand, swapping the uncertainty of Scottish regulation for increasingly aggressive UK oversight may not be all bad for electric utilities and other providers of essential services.

For example, Ofwat, which oversees water and sewerage services in the UK, has taken an increasingly aggressive stance on rates.

And Ed Milliband, the likely Labour Party candidate for prime minister in the next election, has pledged to slash utility rates if he wins the office.

Meanwhile, UK deflation has depressed rates for many essential services below the level needed to cover costs.

Ofgem has referred the retail electricity industry to the Competition and Markets Authority for a full investigation of the six largest UK power companies and how their dominance affects the consumer.

Depending on the outcome of this inquiry, utilities could be forced to separate their retail arms, losing the benefit of vertical integration to promote competition.

An independent Scotland is expected to have a government that leans left. And a desire to keep customer rates low may eventually prevent utilities operating in the country from earning a fair return.

At this juncture, however, there’s no evidence that Scottish regulators have considered any radical changes. In fact, companies may benefit from a new regulatory environment—after all, UK regulations for power companies have swelled from 120 pages in 2007 to 777 pages.

In short, even if Scotland decides to go its own way, independence won’t be the death of essential-service providers. And this change could bring unexpected opportunities.