For most of January, utility stocks continued their market-leading performance of 2014. However, the Dow Jones Utilities Average has given up almost 10 percent of its value in subsequent weeks, reflecting a shift in momentum and a welcome break after last year’s breathless rally.

Financially and operationally, utilities are at their strongest since the early 1960s. Relations with regulators remain salutary in most states. And utilities have systematically cut debt and eliminated near-term refinancing risks, while shedding operations outside their core regulated businesses. Meanwhile, solar power has emerged as a powerful new engine for future earnings growth. 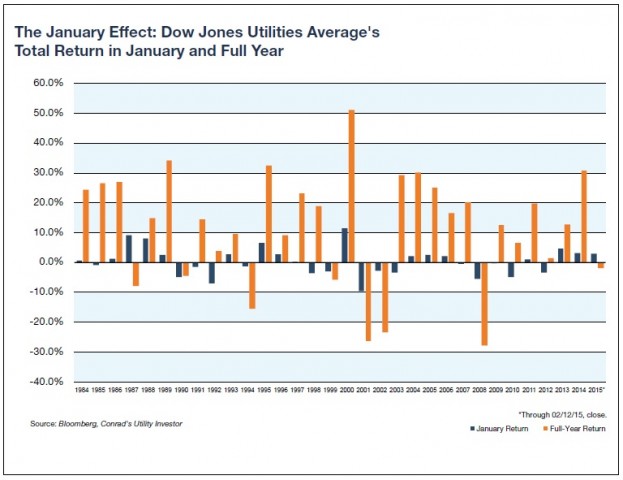 The lone exception to the January Effect occurred in 1987, when rising inflation and tight monetary policy eventually triggered one of the worst one-day crashes in history.

But in early 2015, global deflation is the clear and present danger, the US dollar is king, and major commodities such as crude oil and iron ore have pulled back significantly from year-ago levels.

Conventional wisdom calls for the Federal Reserve to raise interest rates this year. However, hiking rates when the European Central Bank and other monetary authorities have turned to quantitative easing could propel the US dollar’s value to levels that cripple exports and multinationals’ profits. Such a move risks a severe dislocation to the financial system.