The Rise of the Machines

The Dow Jones Utility Average has gained 253 percent since the index bottomed on March 9, 2009. And many US gas, water and electric utilities trade at historically elevated valuations after the massive rally that followed Donald Trump’s election.

In contrast, the S&P 500 Telecommunications Services Index has appreciated by only 74 percent since bottoming on Oct. 10, 2008. Excluding dividends, the index is roughly flat since the third quarter of 2012. Among yield-oriented equities, only master limited partnerships fared worse over this period, thanks to the collapse in oil and gas prices. 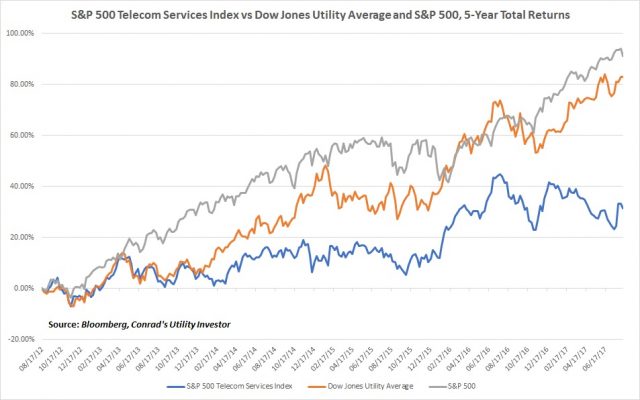 The telecom sector’s underperformance dates back even further. Sector heavyweight Verizon Communications’ (NYSE: VZ) stock price has yet to revisit its October 1999 high of $62.29, while Wall Street darling T-Mobile US (NSDQ: TMUS) still trades at a 22 percent discount to its July 2007 high of almost $82.

Despite this underperformance, the sector hasn’t been without its success stories since the Telecommunications Act of 1996 broke up local-phone monopolies and deregulated the industry.

A wave of consolidation has given the remaining big cable companies an effective oligopoly in the entertainment space and in some regional broadband markets.

Industry behemoth Comcast Corp (NSDQ: CMCSA), which has grown its cash flow consistently over the years, trades at 18 times its share price from 20 years ago.

Over the same period, the value of regional player Shenandoah Telecommunications’ (NSDQ: SHEN) common stock has increased seventeenfold, fueled by the company’s consolidation of cable, television, local-phone, and wireless services in Appalachia.

Customers who bought Vonage Holdings Corp’s (NYSE: VG) 2006 initial public offering on the promise that its voice over internet protocol (VoIP) would supplant local phone connections are still down by almost 50 percent. WorldCom has been extinct for more than 15 years, while the headstones of smaller players litter the telecom graveyard.

Income-seeking investors once flocked to rural telecoms for their high yields and the steady revenue in ostensibly less competitive markets. Among the names covered in our Utility Report Card, only Consolidated Communications (NSDQ: CNSL) hasn’t slashed its dividend, though the recent acquisition of FairPoint Communications arguably has put the payout in danger.

Given all this carnage, investors can be forgiven for taking a dim view of the telecom sector. But best-in-class telecom providers appear to be on the verge of an underappreciated growth phase, spurred by the rise of machine-to-machine communications and the internet of things (IoT).

In addition to the availability of inexpensive data storage and processing power, the internet of things owes its recent ascendance to the evolution of global telecommunication technology over the past two decades.