Three Keys for Successful Investing in the New Year

In 2014, the Dow Jones Utilities Average generated a positive return for the sixth consecutive year. Other income-oriented groups also fared reasonably well, with Alerian MLP Index, the Bloomberg North American REIT Index and the S&P 500 Telecommunication Services Index all finishing the year in the black. 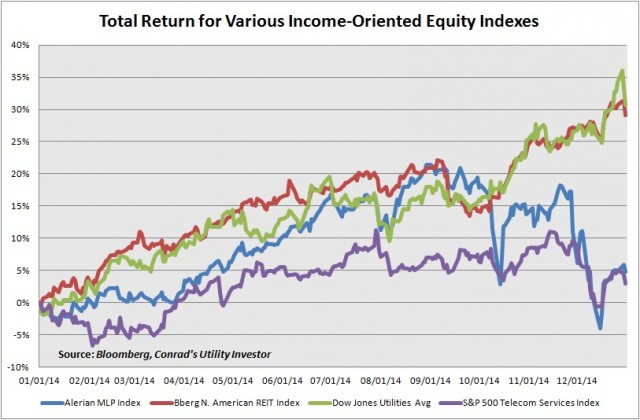 The utility sector outperformed convincingly last year, while the Alerian MLP Index gave up a good chunk of its gains in the back half of 2014 because of concerns about falling oil prices and souring sentiment toward the energy sector.

At the beginning of 2014, the consensus forecast called for interest rates to rise, leading to a terrible year for utility stocks and other dividend payers. 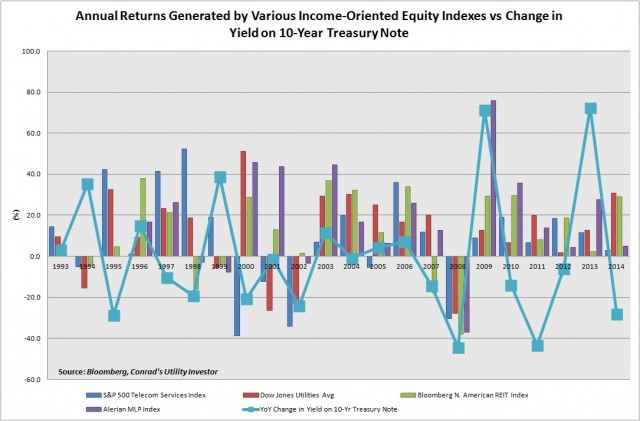 But the 10-year Treasury note yielded 2.17 percent at year-end, down from more than 3 percent at the start of 2014; this surprise decline occurred as the market began to understand that the Federal Reserve plans to tighten monetary policy gradually.

Stocks also received a boost from a strengthening US economy and dollar, which increased the appeal of Treasury bonds—the world’s favorite safe-haven investment.

Key No. 1: Kick the Tires on Consensus Forecasts

Heading into 2015, the popular view once again calls for interest rates to rise in 2015, fueled by the Fed’s efforts to push up the cost of money.

We have our doubts.

For one, the core inflation rate remains negligible—and that excludes the precipitous drop in the price of West Texas Intermediate crude oil last fall. In fact, most commodity prices tumbled last year, with the exception of coffee, which received a boost from the weather in key growing regions.

A concerted effort to push up interest rates would also run the risk of pushing the US dollar’s exchange value much higher relative to our biggest trading partners’ currencies, undermining the competitiveness of US exports.

More important, historical data underscores that successful income investing doesn’t depend on trying to forecast the direction of interest rates correctly–a good thing when you consider professional economists’ inability to do so with accuracy.

Given the tenuous correlation between dividend-paying stocks and interest rates, we’d pay closer attention to other potential threats that could darken the horizon.

For example, the risk of a disturbance in global credit markets has increased, primarily in developing countries that have issued significant amounts of US dollar-denominated debt.

And don’t forget about the blowback from the severe downdraft in oil prices. Although the cheapest gasoline prices in a decade will give consumers a bit of a breather, investment in the energy sector has been an important growth driver in North America.

The contraction in the energy sector could also cause ripples in local economies and the banking industry, especially among smaller financial institutions that have significant exposure on their loan books.

Key No. 2: Know Your Investments and Seek Underappreciated Value

Heading into the first half of 2014, US equities have several tailwinds working in their favor. The domestic economy expanded at an annualized pace of 5 percent in the third quarter—the fastest growth rate in a decade.

Meanwhile, the unemployment rate has receded to its lowest level since the 2008-09 credit crunch. Inflation should also drop this year, fueled by the sharp decline in oil prices and a stronger US dollar reducing the cost of imports.

But equity valuations look elevated in the seven-year-old bull market; these higher expectations can be difficult to meet or beat in this environment.

Stock prices will rise as long as investors remain willing to pay them. But the Dow Jones Utilities Average trades at 20.6 times trailing earnings—one of the sector’s highest valuations since its pre-crisis high.

Last year’s successes included a 38 percent gain in unloved Hawaiian Electric Industries (NYSE: HE) and a 43 percent gain in Enbridge Energy Partners LP (NYSE: EEP). Over the past few months, we’ve add a handful of undervalued names that could deliver differentiated returns in 2015. 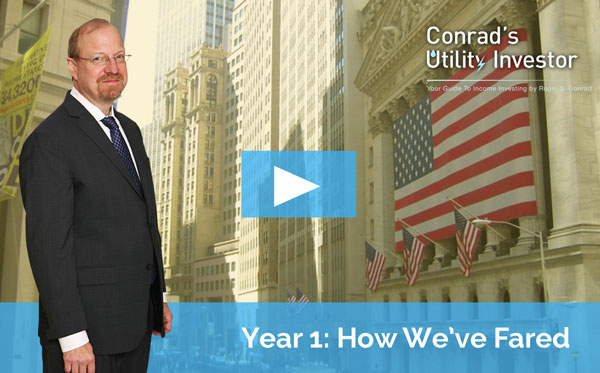 With utility stocks at these levels, even the slightest disappointment could prompt investors to take profits, wiping out much of the gains from last year.

Accordingly, I’ve resolved to take profits in stocks when buying momentum pushes them to valuations where the risk-reward balance skews to the downside.

In the January 2014 issue of Conrad’s Utility Investor, I reminded investors that the first 31 of the year doesn’t necessary serve as a harbinger for the next 12 months. Although the utility sector’s strong performance in January 2014 set the tone for the rest of the year, stocks went the opposite direction in 10 of the past 31 years.

Instead of focusing on macro-level technical indicators, we prefer to look at price action in individual stocks to determine when it’s time to take some money off the table.

Our exits of Enel and Windstream Holdings were particularly well timed.

Although Enel’s American depositary receipt rallied higher in late spring, the stock had given up these gains and more after a dividend cut. The euro’s weakness relative to Uncle Buck likewise didn’t help matters.

We sold Windstream Holdings after the regional telecom unveiled plans to spin off some of its assets as a REIT; the stock surged in the wake of this announcement, though we viewed the move as a thinly veiled dividend cut.

We expect to take more profits opportunistically in 2015, especially in our Aggressive Income Portfolio.

Some income-seeking investors balk at selling high-yielding stocks because they rely on these dividends for monthly or quarterly income.

But consider the case of Windstream Holdings. The stock has pulled back by almost $4 per share since we issued our sell call—that’s equivalent to four years of dividends at the current rate and more than five years after the forthcoming reduction.

By turning these paper profits into real gains, investors generate proceeds to reinvest in better-positioned fare.