The history of gas, electric and water utilities is one of ongoing consolidation. Sometimes the deals come fast and furious, such as in the late 1990s and the mid-2000s; other times, merger and acquisition activity slows to a trickle. 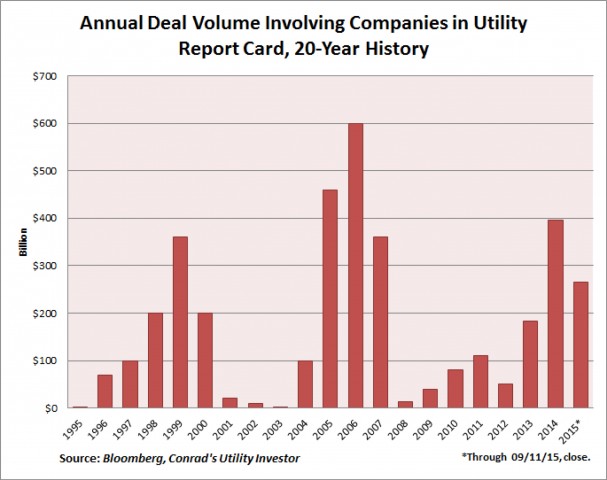 Over the past few years, an upsurge in deal flow has resulted in a number of utilities and telecom stocks being taken over for sizable premiums, handing lucky investors a handsome windfall.

We were on the receiving end last year, when NextEra Energy (NYSE: NEE) announced a takeover offer for former Aggressive Income Portfolio holding Hawaiian Electric Industries (NYSE: HE), which we sold for a 29.6 percent gain.

Fast-forward a month and Canada-based electric utility Emera (TSX: EMA, OTC: EMRAF) stepped up to the plate with a cash offer of US$27.55 per share—a roughly 50 percent premium to where the stock traded when TECO Energy started its strategic review.

The urge to merge has also hit the telecom sector. In August, regional telecom provider Shenandoah Telecommunications Company (NSDQ: SHEN) agreed to acquire ailing rival NTELOS Holdings (NSDQ: NTLS) for $9.25 per share in cash—a take-under relative to the target’s stock price a year ago, but more than two times its July 2015 low.

Several factors suggest there should be plenty more deals to come.