Master limited partnerships (MLP) that produce oil and gas traditionally offer higher distribution yields than names that own pipelines and other midstream infrastructure.

Not only do these names entail greater exposure to commodity prices, but these companies also rely heavily on acquisitions to offset the natural decline rate of the wells in their portfolios and drive distribution growth.

However, recent mergers and acquisitions have added scale and bolstered the cash flow generated by some of these high-yielding names.

Despite high-profile attacks on Linn Energy LLC (NSDQ: LINE) and other upstream MLPs in Barron’s and elsewhere, some of the most maligned upstream operators have demonstrated their staying power, frustrating the short sellers.

Linn Energy, for example, last month announced the $2.3 billion purchase of 900,000 net acres in the Rockies, on the Gulf Coast and the Mid-Continent region from Devon Energy Corp (NYSE: DVN).

This acreage package is home to more than 4,500 producing wells that exhibit an average decline rate of about 14 percent. Linn Energy has also identified more than 1,000 potential drilling locations and 600 recompletion opportunities.

The immediately accretive acquisition adds to the MLP’s distributable cash flow, the account from which it disburses its quarterly payouts.

Meanwhile, Linn Energy’s sale of its assets in the Granite Wash will help to fund the deal while divesting acreage that exhibits a higher decline rate and hasn’t always lived up to expectations on the development front.

Linn Energy’s previous purchases of assets from BP (LSE: BP, NYSE: BP), coupled with the exchange of some of its acreage in the Permian Basin for a portion of ExxonMobil Corp’s (NYSE: XOM) interests in the Hugoton Basin, are further evidence that the MLP continues to execute its game plan.

And Linn Energy’s acquisition of Berry Petroleum provides invaluable, albeit expensive, proof of concept for future acquisitions of C corporations. 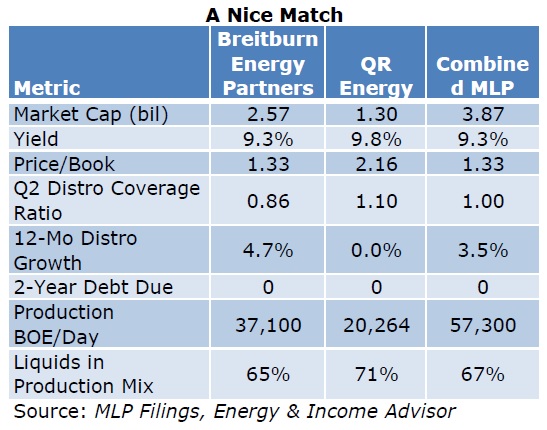 Vanguard Natural Resources LLC (NSDQ: VNR) and other management teams have cited increasing competition from private-equity buyers as one of the reasons that valuations have become stretched within a certain price range.

Accordingly, upstream MLPs have pursued a variety of means to pursue larger deals where the competition isn’t as fierce.

The combined MLP will also boast a diversified asset base that includes a presence in 14 producing areas and more than 12 states. 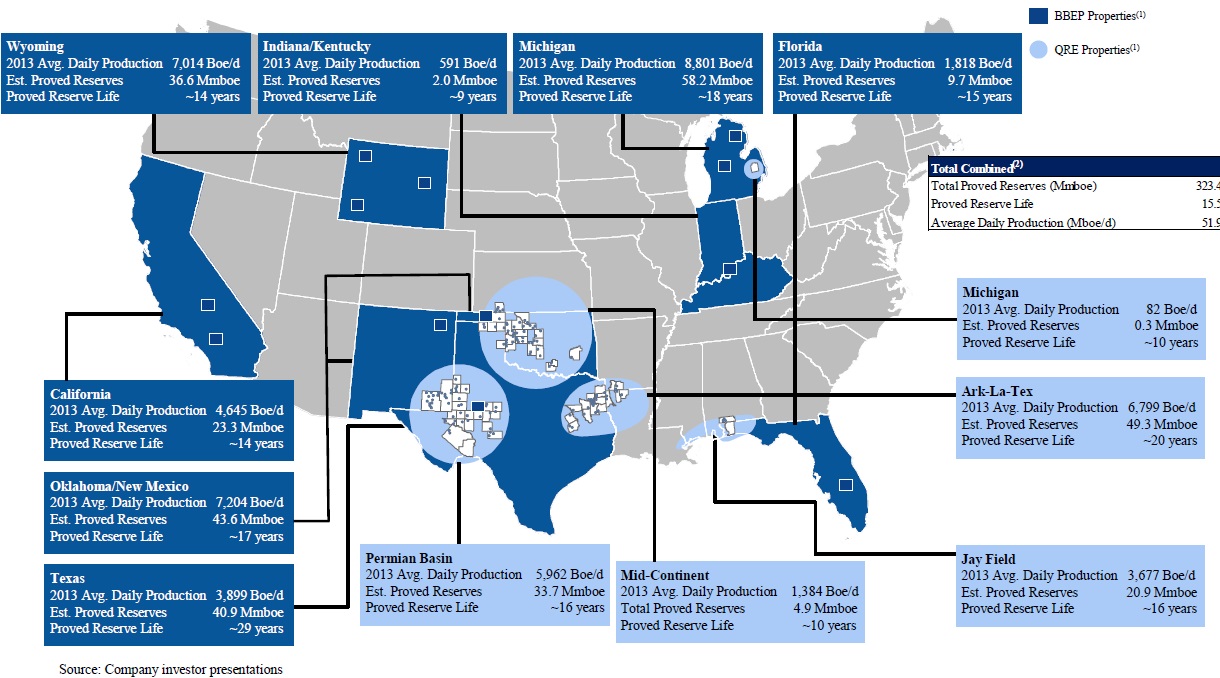 After this transformative acquisition, Breitburn Energy Partners will boast proven reserves of 323 million barrels and a reserve life of 15 to 16 years. Crude oil and natural gas liquids will account for about 66 percent of this resource base.

Management expects to save about $13 million on general and administrative costs annually, while the complementary nature of the MLPs’ asset bases should produce additional synergies and build regional scale.

Given the relatively small size of the parties involved, regulatory approval shouldn’t be a stumbling block for the deal. In this case, the stock market represents the biggest risk to a timely close.

Under the terms of the proposed transaction, QR Energy’s investors will receive 0.9856 units of Breitburn Energy Partners for each unit that they hold.

At Breitburn Energy Partners’ current stock price, this exchange ratio amounts to a 14.4 percent premium–down from almost 18 percent when the acquisition was first announced.

Management projected that the accretive deal would enable Breitburn Energy Partners to raise its annualized distribution to $2.10 per unit from the current rate of $2.01 per unit, signaling management’s confidence in the combined MLP’s future growth prospects.

This distribution increase is a welcome sign after the MLP’s distributable cash flow covered only 86 percent of its second-quarter payout. And we expect the deal to help Breitburn Energy Partners continue its string of raising its payout for 17 consecutive quarters through its consistent operations and timely acquisitions.

This hedge book leaves future cash flow somewhat exposed to fluctuations in future energy prices; a significant decline in the outlook for oil and gas prices could force the MLP (and its peers) to hedge its production at lower prices.

We’d point to Eagle Rock Energy Partners LP (NSDQ: EROC) as a beaten-down name that’s primed for a partnership with a private-equity firm looking to monetize a portfolio of mature oil and gas properties.

And in the June 17 issue of Energy & Income Advisor, we highlighted Constellation Energy Partners LLC (NYSE: CEP) as an “opportunistic trade,” noting that the market hadn’t priced in a potential return to distribution growth.

The exchange of a disinterested general partner for one motivated to drop down has already lit a fire under the MLP’s unit price.

Constellation Energy Partners has reduced its debt load substantially since 2009 and refocused its drilling activity on oil-bearing plays within its existing asset base.

Despite this halting progress, the MLP hasn’t paid a distribution mid-2009 and briefly considered converting to a C-corp to lighten unitholders tax bills.

In the second quarter of 2013, Constellation Energy Partners acquired an interest in 67 producing wells in Texas and Louisiana from privately held Sanchez Oil & Gas Corp for $20 million in cash and about $10 million in equity.

After this deal, Sanchez Oil & Gas owned about 70 percent of Constellation Energy Partners’ Class A units and about 16 percent of its outstanding Class B units, setting the stage for additional collaboration between the two outfits.

Constellation Energy Partners’ sponsor, PostRock Energy Corp (NSDQ: PSTR), sued to block the transaction. The sides agreed to a settlement in March 2014 that will give Sanchez Oil & Gas all of the MLP’s Class A units and give PostRock Energy an opportunity to exit its remaining ownership.

This deal is an incremental positive for Constellation Energy Partners, removing the sole hurdle blocking the MLP from pursuing a transformative relationship with Sanchez Oil & Gas that likely will involve a name change, a series of drop-down transactions and the potential initiation of a quarterly distribution

Looking for more takeover targets in the energy patch? The May 27 issue of Energy & Income Advisor highlighted seven of our favorites, including two energy-focused MLPs that offer above-average yields.

One of our picks, Kodiak Oil & Gas Corp (NYSE: KOG), already received a takeover bid from Whiting Petroleum Corp (NYSE: WLL) and has rallied by more than 25 percent since the issue ran.

Our Secret: Focusing on high-quality names that trade at reasonable valuations. Holding a name that can’t stand and grow on its own in the hope of a takeover isn’t necessarily a winning strategy.