The Alerian MLP Index plunged on Oct. 14, the day that Dominion Midstream Partners LP (NYSE: DM) debuted on the New York Stock Exchange. Nevertheless, the newly minted publicly traded partnership had no problems achieving the high end of its pricing range. And over the subsequent weeks, the stock has surged by 63 percent.

Given the market’s overwhelmingly positive reception of Dominion Resources’ (NYSE: D) midstream spin-off and Next Era Energy Partners LP (NYSE: NEP), it’s no wonder that at least half a dozen US utilities are considering creating and listing their own master limited partnerships (MLP).

Electric utilities also continue to contemplate launching their own yieldcos, a spin-off C corporation in which the parent plans to drop down power plants that operate under long-term contracts. (See Yieldcos: Built to Last, But Priced for Speed.)

NRG Energy (NYSE: NRG) started this craze with the initial public offering (IPO) of NRG Yield (NYSE: NYLD) in July 2013. Since the stock started trading in New York, the spin-off has generated a total return of 72.4 percent and raised its payout every quarter.

The investment thesis for these MLPs and yieldcos is straightforward: The parent monetizes power-generating assets that operate under long-term contracts, selling them to the MLP or yieldco to drive dividend growth and price appreciation.

This strategy achieves a higher valuation for these assets and provides the parent with access to low-cost capital to invest in additional growth projects.

And in both cases, the sponsor corporation maintains control over the management of these assets and takes its cut of the MLP or yieldco’s present and future cash flow via a retained equity interest.

The IPO of Dominion Midstream Partners also introduces a degree of separation between Dominion Resources and the capital-intensive construction of capacity to liquefy and export natural gas from its existing import terminal in Cove Point, Maryland.

Management’s projections call for the project to cost up to $5 billion. However, given the cost overruns and delays that can occur during projects of this complexity, this figure could be 25 percent or 30 percent higher.

In addition, the partnership funds a good chunk of its distribution from legacy contracts to import liquefied natural gas (LNG) that start to expire in 2017, creating the risk of a cash flow shortage if the Cove Point project experiences delays.

That being said, the risk of a distribution cut appears limited. Dominion Resources owns a sizable portfolio of midstream assets that the firm could drop down to the MLP to offset any project-related setbacks and drive distribution growth.

Dominion Resources deserves plaudits for cashing in on the market’s MLP mania, taking some risk off its balance sheet and creating a vehicle through which it can raise low-cost capital. The stock also offers a superior yield and remains an excellent pick for buy-and-hold investors looking to build sustainable wealth.

Here’s how the recent batch of utility spin-offs have fared since their IPO. As you can see, the parents haven’t received as much credit from the market for monetizing assets and creating a vehicle for recycling capital.

Which utility will be the next to create an MLP or yieldco? In late September, NiSource (NYSE: NI) announced plans to spin off its natural-gas midstream business as a MLP to help fund $12 billion to $15 billion in capital expenditures that the parent plans to make through 2024.

With a pre-split market capitalization of $13.3 billion, the midstream and utility sides of the business could be takeover targets after the spin-off.

This isn’t NiSource’s first rodeo. In 2007, NiSource Energy Partners LP filed an S-1 registration form with the Securities and Exchange Commission, but pulled the offering when market conditions soured.

The MLP’s cornerstone asset would be the Northern Access Pipeline, which delivers natural gas from Pennsylvania’s Marcellus Shale to Western New York and Canada. A $400 million expansion to this system is in the pre-filing stages for construction approval from the Federal Energy Regulatory Commission.

Sempra Energy (NYSE: SRE) also expects to decide on a potential MLP or yieldco spin-off by the end of March 2015. If management opts to pursue either of these options, expect the company to move quickly; the under-construction Cameron LNG export facility would likely be the cornerstone asset.

CEO Jim Hughes told attendees of First Solar’s (NSDQ: FSLR) third-quarter earnings call, “We are not prepared to filed a registration statement and pursue a listed yield vehicle at this time.”

Instead, Hughes promised “greater visibility” into ownership interests that the company retains in solar-power projects by reporting these results in a separate segment next year. Breaking out these earnings could facilitate the sale of these assets or serve as precursor to the creation of a yieldco.

Bottom Line: The market’s demand for securities that pay a growing dividend means that utilities will continue to eye MLP and yieldco spin-offs as a means of achieving higher valuations for underappreciated assets and raising low-cost capital. 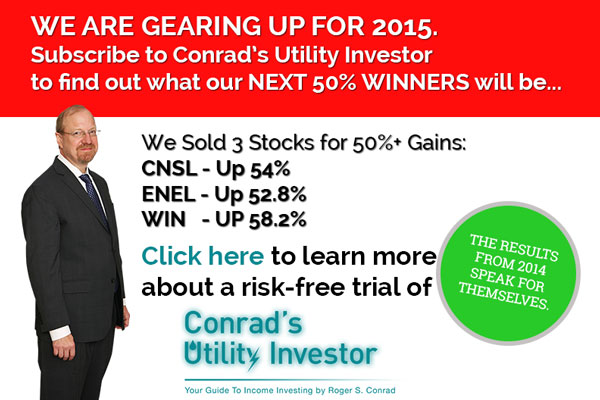