Will the Federal Reserve really “taper” off its easy money policy? The stock market has already reacted, with dividend-paying stocks leading the selling: The Dow Jones Utility Average is now flat for the fourth quarter, after being up better than 5 percent through mid-November.

Ironically, despite their reputation, utility stocks have shown no real correlation with benchmark interest rates since the 1980s for more than a few weeks.

In fact, utilities are still well in the black for 2013, despite a 63.8 percent rise in the benchmark10-Year Treasury Note Yield. And despite a lot of conjecture, the Fed has yet to take any action that could be remotely described as “tapering.”

Retreats in utility stocks have sometimes been a warning of broader market selloffs to come. This one, however, has brought out patient, long-term money.

Fortis’ first foray into the US was the $969 million all-cash buyout of the former CH Energy. That deal was completed in June, after winning approval of New York regulators in exchange for a rate freeze.

At this point, it looks like Fortis should be able to get the UNS deal done by the end of 2014. Arizona has evolved into a favorable regulatory environment the past few years. Meanwhile, the Federal Energy Regulatory Commission and Committee on Foreign Investment in the US should sign off quickly, as they did with the CH deal.

The $60.25 per share purchase price is a premium of better than 30 percent to UNS’ pre-deal price. It’s also a multiple of better than 2.2 times book value. And Fortis’ management has almost certainly also factored in rate concessions and possibly an additional sweetener for shareholders to ensure a yes vote.

That’s a pretty strong vote of confidence in UNS’ value. Because this deal is all-cash, the value is both locked in and limited. But investors who continue to hold on will earn a return of roughly 6 percent, including a likely four quarters of dividends, as long as the deal does close.

Fortis hit a new 52-week low on the takeover news, not an unusual development for an acquirer paying a large premium. It now trades at 1.36 times book and a yield of 4.3 percent paid in Canadian dollars, raised 3.2 percent earlier this month.

The takeover is large relative to Fortis’ pre-deal size, boosting total assets by 33.5 percent. It increases regulated operations’ share of total assets to 92 percent, with 55 percent in Canada and 34 percent in the US. The Arizona operation is also growing faster than the company’s Canadian divisions.

Like all utilities, Fortis is an invest-to-grow story. And this deal will help the company reach the goal of compound annual rate base growth of better than 7 percent. That in turn is the primary fuel for continued profit and dividend growth going forward. And this deal reduces risk as well by adding a new regulatory jurisdiction and region.

This isn’t likely to be Fortis’ last acquisition in the US. And the lower utility stocks are pushed by interest rate worries in the near term, the greater the inducement for new deals from a host of potential suitors. 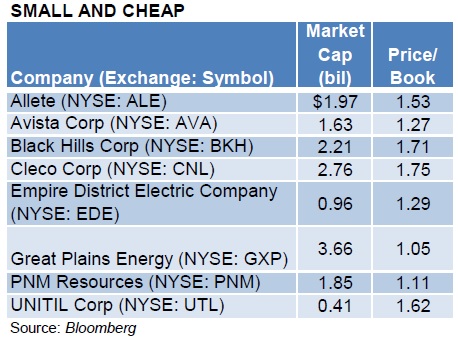 Ripe for the Picking

PNM Resources (NYSE: PNM) is one potential target, trading at little more than book value despite being on track for solid growth. Management is guiding toward full-year 2014 earnings per share of $1.42 to $1.52, supporting the recently announced 12 percent dividend increase. The company also affirmed its on track to meet previous 2013 full-year guidance of $1.35 to $1.41.

Palo Verde is majority owned and operated by Arizona’s Pinnacle West (NYSE: PNW), itself a takeover target though its larger size ($5.81 billion market capitalization) will likely require a bigger buyer than Fortis.

Operating performance has improved markedly over the past decade, with most output sold into wholesale markets. Adding it to rate base would further stabilize PNM’s earnings. So would approval to build a 177-megawatt gas peaker plant and 40 MW of solar.

During the 2014 forecast conference call, Chairman, President and CEO Pat Vincent-Collawn stated he expects Arizona regulators to make their decision in the case by early next autumn.

In the meantime, Palo Verde is fully hedged for 2014, eliminating risk to volatile wholesale markets in the Southwest so long as the transfer to regulated rate base is successful.

PNM’s great task remains strengthening its balance sheet. But the volatile unregulated operations are gone. The company is set to refinance its 9.25 Percent Notes of May 2015 with cash. And it expects to cover its $2.1 billion in planned five-year capital spending without issuing stock.

Prospective suitors may wait until New Mexico regulators rule on Palo Verde and other capital spending issues are resolved. But PNM does meet the most important test for any takeover target: It can grow earnings, boost dividends and strengthen its balance sheet, even if no one ever makes an offer. I rate the stock a buy up to 24.