Warren Buffett’s Berkshire Hathaway (NYSE: BRK.A, BRK.B) started accumulating US utilities in the 1990s and has built an impressive portfolio in subsequent decades.

When Nevada regulators approve the company’s planned $5.6 billion acquisition of NV Energy (NYSE: NVE), Berkshire Hathaway’s MidAmerican Energy will take the crown as America’s largest utility. The subsidiary will boast an asset value of more than $66 billion and annual revenue in excess of $15 billion.

And the purchase of NV Energy likely won’t be Berkshire Hathaway’s last acquisition in the utility sector; with so many investors focused on the specter of rising interest rates, expect more bargains to pop up in this space.

Leveraged-buyout specialists KKR & Co. LP (NYSE: KKR), TPG Capital and Goldman Sachs Capital Partners should have heeded Buffett’s maxim when they forked over $48 billion to acquire the former TXU Corp and create Energy Future Holdings Corp. The rationale behind this deal: A rash bet that rising natural-gas and wholesale electricity prices would offset the debt assumed as part of the merger.

My take when the leveraged buyout was announced in 2007: Investors in TXU Corp should take the money and run.

At first, the acquirers’ high-stakes wager appeared to pay off, as natural-gas prices surged to a high of $13.64 per million British thermal units in July 2008.

But the deepening financial crisis ushered in the Great Recession, sending natural-gas prices spiraling lower. And over the past four years, robust drilling activity in the nation’s prolific shale plays has saddled the domestic market with a persistent supply overhang that has weighed heavily on natural-gas prices. 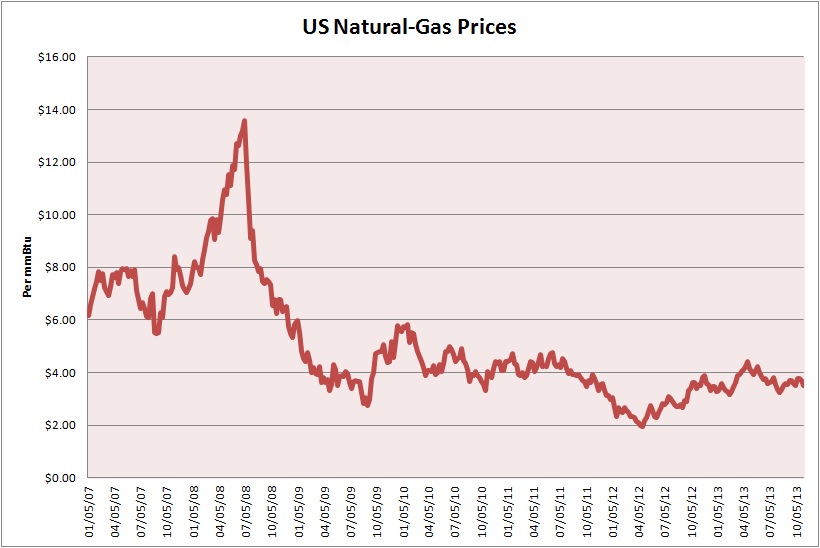 Nevertheless, the utility’s hedge book has provided a degree of protection against lower natural-gas and wholesale-electricity prices, enabling the company to post a profit in the third quarter. These hedges, which currently cover 94 percent of the firm’s exposure to natural-gas prices, will decline to 41 percent in 2014 and 5 percent in 2015.

Challenging market conditions haven’t helped the company, but its biggest problem remains the huge debt associated with the leveraged buyout.

Although an independent TXU Corp would have struggled in the current environment, the utility’s steadier operations would have generated enough cash flow for the firm to stay current on its $13 billion in debt.

Energy Future Holdings’ woes stem entirely from the greed of its private-equity owners, which bet incorrectly that natural-gas prices would rally significantly in coming years. Based on this assumption, the participants in the buyout took on entirely too much leverage, pushing an otherwise strong company to the brink.

The ailing utility made a $270 million interest payment this week, but the outlook doesn’t look promising: Energy Future Holdings lined up $3.8 billion in debt-in-possession financing and a $750 million credit facility to fund its operations through a potential bankruptcy.

Financial woes aside, Energy Future Holdings owns valuable assets, including 15,400 megawatts of generation capacity in Texas. Although low natural-gas prices have compressed profit margins in the company’s wholesale power division, the electricity produced by these plants is essential to meeting the state’s growing demand.

Meanwhile, Energy Future Holdings’ Oncor Electric Delivery unit owns regulated power lines that serve more than 3 million homes and businesses. This asset base could easily (and profitably) merge with another transmission and distribution outfit that operates in Texas–CenterPoint Energy (NYSE: CEP), for example, would be a natural fit for these assets.

With Texas’ economy thriving from the US energy renaissance, robust demand for electricity makes the state an attractive market for power companies that operate in slower growing areas.

The former TXU Corp finds itself at the center of a high-stakes game of brinksmanship that rivals what transpired in Washington last month.

Here’s a quick guide to the players and their motivations in this unfolding drama:

When Energy Future Holdings made its $270 million interest payment this week, the firm postponed an official bankruptcy filing by up to five months. But the move also removed badly needed cash from the company’s balance sheet and likely angered its secured creditors.

Reaching a deal as soon as possible is in every parties’ interests. Any solution will involve liquidating the firm’s debt obligations in exchange for equity of some form or another. The longer the involved parties wait to strike a deal, the more cash will bleed out, and the less inclined an outside party will be to emerge as a white knight to bridge the shortfall of capital.

NRG Energy has demonstrated an appetite for these sorts of acquisitions.

If NRG Energy’s planned acquisition of Edison Mission Energy closes, the company will become the second-largest US electric company by generation capacity, giving it ample scope to pursue additional deals.

Berkshire Hathaway, which has more than $31 billion in cash and $130 billion in marketable securities on its books, would be another candidate to acquire some of Energy Future Holdings’ assets.

But until more clarity emerges on the outcome of the utility sector’s largest leveraged buyout–and soon-to-be biggest bankruptcy–expect these potential acquirers to focus on other opportunities.

Lessons among the Ruins

Investors looking to profit from Energy Future Holdings’ impending bankruptcy and/or breakup should steer clear of the company’s highly speculative secured debt and focus on the chief lesson of this debacle.

Utility stocks are only suitable for buy-and-hold investors when the management adheres to strategies that have served the sector for decades: maintaining healthy relationships with regulators and locking in reliable growth by conservatively financing system improvements.

But when a utility forsakes this conservative approach in favor of a get-rich-quick scheme, investors should be skeptical and keep an eye on the exits.

The best thing for Energy Future Holdings’ customers and prospective investors would be for the leveraged-buyout artists to take a hike and let the utility get back to basics–an approach that enabled many utilities to thrive in a post-Enron world.