In April 2017, Kansas regulators rejected Great Plains Energy’s (NYSE: GXP) proposed acquisition of Westar Energy (NYSE: WR). The two sides returned to the Kansas Corporation Commission with a revised deal, the terms of which aim to mollify the regulator’s concerns about the combination’s post-merger debt levels.

NextEra Energy has moved on from this transaction and will collect a $275 million break-up fee for its troubles. Meanwhile, Berkshire Hathaway (NYSE: BRK.A, BRK.B) has submitted a bid to add Oncor Electric Delivery to its portfolio of regulated utilities.

It Feels Good to Pay Less

Not everyone is happy with the proposed deal. Elliott Management, which owns a significant proportion of Energy Future Holdings’ unsecured debt, reportedly has proposed a competing bid that values Oncor Electric Delivery at $18.5 billion, though Berkshire Hathaway’s record of investment in the utility sector and longer holding period should give its offer a leg up on the activist investor.

In an effort to placate regulators, Great Plains Energy amended its takeover proposal to an all-stock merger of equals, whereby its shares will convert into the right to 0.5981 shares in the newly formed holding company. Meanwhile, Westar Energy’s shares will convert into 1 new share. The recut transaction translates into a value of a bit less than $50 per share for Westar Energy; Great Plains Energy’s previous proposal amounted to $51 per share in cash and a projected $9 in stock.

Although Westar Energy’s shares slid after the Kansas-based utilities announced the rejiggered deal, the effective cancellation of $4.4 billion in merger-related date prompted Standard & Poor’s to raise its credit outlook for both companies to positive from negative. Great Plains Energy’s shares also rallied on the news. 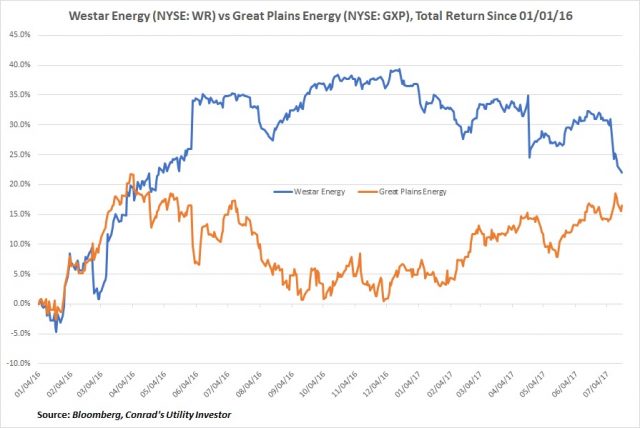 These resurrected deals raise three big questions for the companies involved and the utility sector as a whole:

In the case of Westar Energy and Oncor Electric Delivery, the new offers appear to stand a much better chance of winning regulatory approval, as the terms specifically address concerns that had scuttled previous deals.

By recasting their tie-up as an all-cash merger of equals, Westar Energy and Great Plains Energy won’t take on significant leverage, making the efficiency gains from shuttering and replacing 781 megawatts of older generation capacity even more compelling.

Kansas regulators could still move the goalposts to reject the combination of Westar Energy and Great Plains Energy—it’s happened in the past. Once the utilities formally submit the deal to Kansas and Missouri regulators, we should have some insight into how other stakeholders view the transaction.

Past failures aside, Westar Energy and Great Plains Energy didn’t amend this deal in a vacuum, giving it a good chance of securing regulatory approval.

Although the Public Utilities Commission of Texas rejected previous takeover bids from Hunt Consolidated and NextEra Energy, regulators appear to be on board with Berkshire Hathaway’s proposal to purchase Oncor Electric Delivery. Meanwhile, after rejecting two previous offers, the pressure has shifted to regulators to settle the bankruptcy of the state’s largest utility.

Assuming that regulators sign off on these transactions, gaining shareholder approval will be the next hurdle.

The combination of Westar Energy and Great Plains Energy will enjoy improved efficiency and profitability from its increased scale. The utility also stands to benefit if Missouri passes long-awaited regulatory reform. That said, Westar Energy’s shareholders might grouse about the significantly lower deal premium.

Uniting Oncor Electric Delivery with Berkshire Hathaway’s multi-state utility empire creates numerous opportunities to unlock synergies, including a much lower cost of capital that comes from being associated with an Aa2-rated parent.

Despite the lower offer, Westar Energy and Oncor Electric Deliveries’ stakeholders likely will approve the the deals on the table.

Westar Energy traded in the low $40s per share prior to Great Plains Energy’s bid; the stock would likely tumble to these levels if the deal were to fall through.

Moreover, the hedge fund is in the business of flipping assets, not running them; regulators likely will favor a buy-and-hold investor that takes a longer view. And don’t forget that Oncor Electric Delivery went into bankruptcy because Texas regulators approved a leveraged buyout of TXU Corp by private-equity outfits Texas Pacific and KKR & Co LP (NYSE: KKR).

Perhaps Elliott Management and its partners could convince Energy Future Holdings’ bondholders to swap debt for equity in a spun-out Oncor Electric Deliver and then launch an initial public offering of the utility. This process, however, would take far longer and involve significant complexity and uncertainty.

Bottom Line: Odds favor both deals closing by the end of the year.

A Cap on Premiums?

Do the lower takeover offers being contemplated for Westar Energy and Oncor Electric Delivery signal a trend where regulators effectively cap the premiums paid on utility takeovers?

The US utility sector’s history is one of mergers and acquisitions, with thousands of operating companies early in the previous century consolidating down to several dozen. This quest for scale becomes even more compelling as demand growth slows and efficiency gains become increasingly important.

However, potential takeover targets also trade at demanding valuations. For example, Centerpoint Energy (NYSE: CNP), long rumored to be on the sales block, trades at 23.2 times earnings. The same goes for Atmos Energy (NYSE: ATO) and the handful of smaller gas utilities that remain after a wave of consolidation. And valuations for water utilities are off the chart, with California Water Service Group (NYSE: CWT) fetching 35.8 times earnings.

Even before regulators in Texas and Kansas started to play hardball, sky-high valuations made it difficult to envision would-be suitors offering a significant takeover premium.

However, the lower follow-up offers for Westar Energy and Oncor Electric Delivery underscore one point we’ve emphasized to investors repeatedly: When it comes to utility acquisitions, take the money and run—contentious approval processes mean you could be waiting awhile to realize a few incremental percentage points of value. And the downside risk is considerable.

Buying the right names at the right prices and kicking back while we collect fat dividend checks–that’s what Conrad’s Utility Investor is all about. Even better, some of my favorite picks offer leverage to powerful secular growth trends, including renewable energy, the rise of electric vehicles and machine-to-machine communications.

Do not miss out on this opportunity. Subscribe to Conrad’s Utility Investor today for instant access to my best ideas for the current market and my black list of likely dividend cutters.

Want to try before you buy? Check out a sample issue of Conrad’s Utility Investor to see what you’re missing out on.