What’s Next for Utility Stocks?

The S&P 500 Utilities Index has given up more than 10 percent of its value since early July—just the 18th time since World War II that the sector has posted a double-digit loss from top to bottom.

On average, the previous 17 corrections in “Utility Sector’s Post-War Swoons” ended after roughly 14 months and involved a decline of 23 percent, excluding dividends paid. If past is prologue, the current pullback may have another 10 percent or so of downside, barring any unforeseen catastrophes. 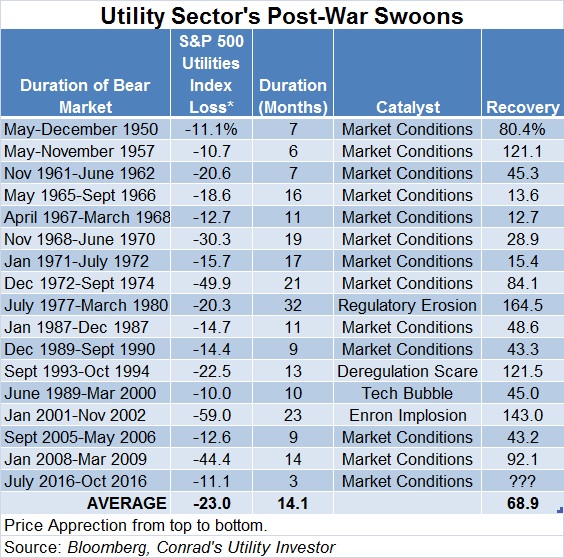 Let’s delve into the proximate causes of some of these previous corrections and their implications for the current environment.

From January 2001 to November 2002, the S&P 500 Utilities Index plunged 59 percent. Several prominent members went beyond the brink and never clawed their way out of the abyss, including Enron—formerly one of the largest US-listed stocks by market capitalization,

The S&P 500 Utilities Index declined by about 11 percent from May to November 1957. In this instance, this modest pullback was followed by an explosive 121.4 percent gain over the next four years.

Despite the difference in magnitude, both corrections started with utility stocks trading at unsustainably high valuations and few analysts calling for the good times to end. At these levels, the bar of expectations becomes increasingly difficult to meet, setting the stage for disappointment and giving investors an excuse to take profits.

Back in 1957, the 11 percent correction had returned utility stocks to reasonable valuations. And with the US electrification boom in full swing, utility stocks generated an outsized return over the next four years.

Six months into the 2001-02 meltdown, the S&P 500 Utilities Sector Index had given up about 11 percent of its value. But the sector’s underlying fundamentals were deteriorating at a rapid rate.

California’s dysfunctional power market had spiraled out of control, triggering bankruptcies and huge spikes in the price of wholesale electricity. Enron was also in the midst of imploding, along with peers that had followed the former industry leader into energy marketing.

By early 2003, two dozen utilities had declared bankruptcy or found themselves on the brink of insolvency. Even shares of high-quality names that opted not to do their best Enron impression sold off.

Lessons from the Big Pullback

Despite the pain associated with the 2001-02 meltdown in utility stocks, investors who held their positions in best-in-class utilities eventually recovered all their losses and much more—even if they owned an Enron or two.