Up until midyear, investors couldn’t get enough of yieldcos—a new generation of spin-off that offers a similar investment proposition to some master limited partnership (MLP), minus the tax advantages.

Here’s how the structure works: The parent monetizes power-generating assets that operate under long-term contracts, selling them to the yieldco to drive dividend growth and price appreciation. This strategy provides the parent with access to low-cost capital to invest in additional growth projects. Many of these yieldcos focus on renewable energy.

Over the first 12 months after NRG Yield (NYSE: NYLD) went public, the stock generated a total return of 142 percent—this remarkable success prompted the launch of eight copycat entities, the most recent of which was SunEdison’s (NYSE: SUNE) Terraform Global (NSDQ: GLBL).

But investor sentiment toward the group has soured considerably, with the Bloomberg North America Power Yieldco Index giving up more than 40 percent of its value since the end of May 2015. 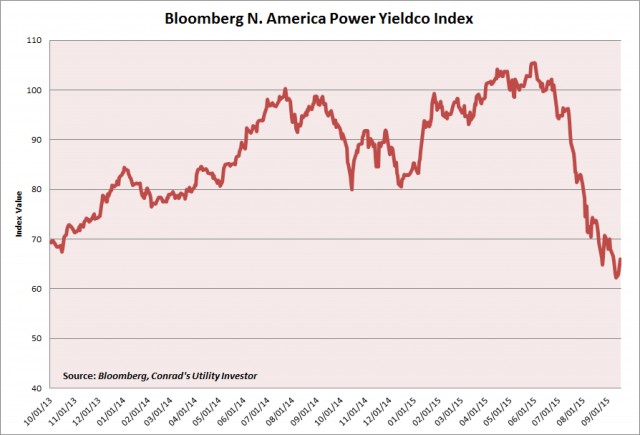 Given the group’s recent underperformance, prospective yieldco spin-offs from Acciona (Madrid: ANA, OTC: ACXIF) and Energia de Portugal (Lisbon: EDP, NYSE: EDP) have been put on hold. Many investors have started to question the sustainability of the business model itself.

The irony is that yieldcos are finally living up to their names and provide above-average dividend yields.

Although the sponsors largely have lived up to their end of the bargain by selling assets to their yieldcos to fuel dividend growth, a number of factors have spooked investors, including concerns about rising interest rates and valuations that reflected unreasonable expectations—even if everything went according to plan.

The severe downdraft in oil and gas prices worldwide has cooled investors’ ardor for renewable energy and fanned concerns that cheap fossil fuels will undermine the economics of renewable-energy projects.

Investors also worry about a replay of the early 1980s, when the Reagan administration eliminated renewable-energy subsidies instituted by President Carter. These fears loom larger with the upcoming presidential election and federal tax credits for solar power slated to expire at the end of 2016.

Although long-term contracts ensure that the cash flow generated by yieldcos’ renewable-power capacity won’t be at risk, fewer new projects at the parent level could limit future growth opportunities.

These headwinds partially explain the huge drop in the value of solar-power developer SunEdison’s stock and the two yieldcos under its auspices, TerraForm Global and TerraForm Power (NSDQ: TERP).

To worsen matters, the downdraft in most yieldcos’ share prices has increased these entities’ cost of equity capital significantly, raising questions about the economics of future drop-down transactions. Valuations look more reasonable on a price-to-book basis than in the first half of 2015, but an uncertain growth outlook doesn’t help matters.

Given the market’s reaction to recent equity issuance, the economics of future drop-down transactions would have been jeopardized without the sponsor’s support.

Time will tell whether other yieldco sponsors step up to the plate in a similar fashion.

Conrad’s Utility Investor subscribers can find my most recent comments on these yieldcos in my Utility Report Card. This table, which features vital statistics for and my assessment of 215 essential-service companies, also includes my proprietary Quality Grades (A to F) that help to quantify the risk associated with each name. (Non-subscribers can see a complete list of the stocks covered in my Utility Report Card.)

Payout ratios and revenue stability figure prominently in my Quality Grades, among other quantitative and qualitative factors.

Abengoa Yield posted a payout ratio of 76.4 percent in the second quarter, while NextEra Energy Partners generated enough cash flow to cover its dividend by 181.8 percent. TerraForm Power covered its dividend by a 152.5 percent, and TransAlta Renewables paid out 83.3 percent of its cash flow.

NRG Yield and Pattern Energy Group (NSDQ: PEGI), on the other hand, disbursed more to their shareholders than they generated in cash flow, though these shortfalls are expected to dissipate in coming quarters. (For subscribers, the Utility Report Card from August and September issues of Conrad’s Utility Investor features my take on second-quarter results for all these yieldcos.)

Although long-term contracts should ensure that these yieldcos’ dividends aren’t under threat, investors shouldn’t misconstrue this safety as a buy signal. The big question is whether their sponsors will take the necessary steps to support their yieldcos in these challenging times.

NextEra Energy did the right thing, but some yieldco sponsors are better equipped than others to lend a helping hand.

But even the best yieldcos probably won’t return to the bloated valuations that prevailed earlier this year. That being said, names that can deliver solid dividend growth should recover some of their luster.

Prospective investors should also keep the worst-case scenario in mind. Market history is rife with examples of strong companies abandoning their spin-offs and leaving investors holding the bag.

Consider Mirant Corp, a spin-off from Southern Company (NYSE: SO) that many pitched as a sure-fire winner from deregulated utility markets. Eight months into its life, Mirant’s stock had given up more than two-thirds of its value, hit hard by Enron’s implosion and California’s power crisis. Months later, Mirant was in bankruptcy. Look before you leap.