Your Best US Default Insurance

Don’t believe everything you hear. The odds are still heavily in favor of enough Democrats and Republicans joining forces to prevent the first bona fide US default since the government operated under the Articles of Confederation.

In fact, there’s actually a pretty good chance this latest game of chicken will wind up being credit positive for Uncle Sam.

The budget compromise reached earlier this year didn’t make politicians on either side of the aisle entirely happy, combining tax increases and “sequester” limits on spending.

It did, however, cut the projected annual federal deficit to roughly 4 percent of GDP, the lowest level since the 2008-09 crash. And if US Office of Management and Budget estimates are half right, the percentage will drop even more by the end of the decade.

Falling deficits induced Standard & Poor’s—the credit rater that had the temerity to cut the US from AAA in 2011—to boost its outlook for the country to “stable” from “negative” this year. And at least so far it’s kept it there, despite the impasse in Washington.

Getting a “clean bill” to reopen the government and raise the federal debt ceiling is, of course, the Democrats’ goal. They’ve lined up solidly to force Republicans to fall into line or risk being blamed. And recent polling data shows that risk is growing.

Even Republicans, however, have options. The most credit positive step would be simply holding the President to his recent pledge to negotiate on entitlement spending by reopening the government and passing a short-term extension of the debt ceiling. 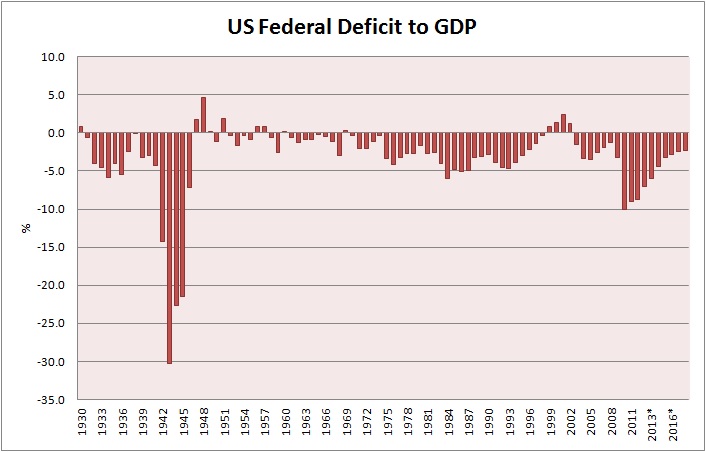 If negotiations fail to materialize, they would have the option of pushing the envelope again, and with almost certainly more support from the public.

This thing is still likely to go down to the wire. And if it does, we’re likely in for a series of gut checks as October 17, the potential day of default approaches. That means lower prices for stocks across the board, including some companies that have traded above my buy targets for many months.

My strategy in recent weeks has been to use the lower prices as an opportunity to build up the model portfolios in Capitalist Times, Conrad’s Utility Investor and Energy & Income Advisor. And I fully expect to be able to add more bargains in the weeks ahead.

That said, however, it’s also perfectly legitimate to ask what happens if there actually is a real default. To be sure, the politicians that continue to seriously entertain default as a workable option are primarily backbenchers. But with both Democrats and “Tea Party” Republicans locked into positions, failure to make a deal is at least a possibility.

Here’s my take. First of all, we would be in uncharted territory as far as the investment markets are concerned. And that would almost certainly bring a wave of volatility in global markets.

That said, the shape of that volatility is inherently unpredictable. In fact, the lesson of recent crises is clearly that investors should guard against jumping to conclusions about what’s supposedly inevitable.

The biggest surprise of the 2011 impasse and US credit downgrade, for example, was the wave of safe haven money that poured into US Treasury securities at the tim

Rather than be truly concerned about Uncle Sam’s credit, investors worried more about the global economy and went back to the investment that had performed the best in 2008 — US Treasury bonds.

It seems absurd to imagine a rush to Treasury bonds if Uncle Sam stops paying interest. But given the relative calm in that market over the past month, it’s certainly possible Treasurys could again fare better than more economically sensitive sectors.

One major difference between now and the period before the 2008 crisis is the dramatic expansion of the Federal Reserve’s balance sheet. The dollar value of the bonds and other securities in the Fed’s portfolio has risen from $862 billion in 2006 to more than $4 trillion.

Presumably, the Fed could act to support Treasurys, if a government default cracks that market. That would be supreme irony, as Tea Party actions would essentially have triggered yet another round of dramatic expansion of power for an unelected government agency.

Whatever happens, however, the US will still be a rich country. Moreover, America is on the verge of one of the most bullish economic developments in decades: An inexorable push toward energy independence, with the result that the country will be producing more than it consumes by Thanksgiving 2018.

The key is the dramatic increase in production of natural gas, oil and other liquids, thanks to the success of hydraulic fracturing (aka, fracking) technology. And as new transportation and export infrastructure comes on stream, incentive to boost output will only grow.

Energy imports have been an Achilles heel for the US economy since the 1960s. In contrast, the closer this country comes to being a net energy exporter, the more the global demand for US dollars.

And, the better positioned the US economy is against global rivals like China, which recently became the world’s largest energy importer.

It’s not likely to be a pretty sight. But the US would survive even a full-on government default, and probably would fare better than most nations from the fallout of its own actions. Moreover, market volatility will increase the pressure on politicians to make a deal and end the crisis.

That means a post-default selloff will be a buying opportunity, rather than a time to run for the hills. I prescribe the following four steps.

1. Take a careful inventory of the stocks you own. Well run, financially strong outfits proved in 2008 they have the ability to weather even the most severe credit crunches, market crashes and sudden recessions. Holding any stock during a dramatic selloff requires confidence the underlying company will come out the other side in good shape.

Potential warning signs include a need to raise capital in the near future. As we saw in 2008, interest rates in a crisis can quickly spike for even the strongest credits. And issuing stock in falling markets can create massive profit dilution.

Either eventuality can force companies to cut dividends, doing even more damage to their share prices. Be ready to sell such weaklings.

Companies without such vulnerability may also take hits, even if they keep paying steady dividends. But as 2008 proved, they will eventually recover when market conditions turn back up.

2. Make sure you have cash on hand, particularly if you’re living off of your investments. This will limit the risk that you’ll have to sell good stocks at bad prices, just because you need the money.

3. Have some assets outside the US dollar. That’s not necessarily gold.

In fact, the yellow metal is now within roughly $10 of its lowest point since 2010. That may indeed be due to speculation that the US politicians are about to make a deal, as some in the media suggest.

And if true, the downtrend would reverse quickly on a real default.

Gold, however, was not a winner in 2008. Nor has it fared well in recent years during any economic event that threatened economic growth. It’s always good to have some in your portfolio. But don’t automatically assume it will save your bacon if the US government defaults.

That’s also true for foreign stocks. But if the US dollar does start to take hits, the US dollar value of their dividends and share prices will rise, as their home currencies head higher. And if there is no crisis, you can still win as the underlying companies grow profits and dividends.

Canada and Australia are two resource rich countries with currencies that have kept pace with inflation and anti-US dollar pressures over time. And stocks in those countries are cheaper than they’ve been in some time, as the Canadian and Australian dollars have weakened against the US dollar on growth concerns.

4. Set “dream” buy prices for stocks you’d want to own, and match them with buy limit orders.

For example, during the 2011 budget battle, Enterprise Products Partners (NYSE: EPD) traded for less than $40 a unit. A buy limit order set at that price may never be filled. But if it is, you’ll own a stake in one of the strongest energy midstream MLPs in America at a price to yield of nearly 7 percent.

The Dow Utility Average has rallied in the fourth quarter of the year 36 times since 1969. That’s made ProShares Ultra Utilities (NYSE: UPW) —which has similar leverage but to the upside — the better bet in all but a handful of years.

The exceptions have been the truly extraordinary years, with 2008 the most recent example. A US government default that goes unresolved for several weeks could well create one of those, making Ultra Short Utilities a winner again. And the same would be true for most of the other Ultra Short ETFs offered by ProShares, including ProShares UltraPro Short S&P 500 (NYSE: SPXU).

The risk with these is that there’s no default, and stocks regain their upward momentum. Should that happen, owners of these funds will see some dramatic losses. That’s why they should be purchased sparingly.

Nothing is 100 percent certain or safe in investing. Rather, success depends on making judgments about what’s probable, and then diversifying and balancing to guard against the oddball events.

A full-on US default is still not the most probable outcome of the ongoing budget battle. But should one occur it would be quite destructive to wealth.

Making sure your stocks’ underlying companies can weather the turmoil, keeping cash on hand for expenses, having some money outside the US dollar and setting dream buy prices to take advantage of falling stock values isn’t a foolproof strategy for what might happen. And even purchasing some short ETFs will help only so much.

These moves, however, will ensure you’re whole once a potential crisis runs its course. And equally important, it will keep you in the game for stock market gains if the worst case is avoided.